This week we are going to explore the correspondences between film, literature, and the explosion of a three-year civil war (The Spanish Civil War, 1936-1939), and how that short-and-long span of time resonates as other wars (both civil and international) in which Spain participated.  The reading by Pavlovic on cinema and the Spanish Civil War, alongside the poems by Federico García Lorca and Miguel de Unamuno, and the essay by Unamuno entitled “My Religion” will help us see how quarreling, division, censorship, control, and remembrance play critical roles in such development.

By Saturday at 5PM at the latest, please post comments, questions, or doubts you have regarding the topic of this endless war, and how you see it represented in the cinema and literature we are going to discuss. 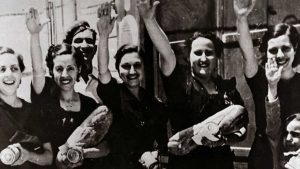 With Basilio Martín Patino’s Canciones para después de una guerra/Song for After a War we will see these demons of war, nationalism, sociocultural splintering, bad memories, and surveillance that originated long before 1936, and lasted long thereafter, as Martín Patino’s 1971 film and the memory of the execution of García Lorca, as well as Unamuno’s philosophical resistance, demonstrate.