Last Wednesday my classmates and I embarked on a cheese tasting excursion. Prior to the trip, however, I was slightly scared of trying all these cheeses as I am a bit scared to try new foods. Upon arriving and seeing the five kinds of cheese in front of me. 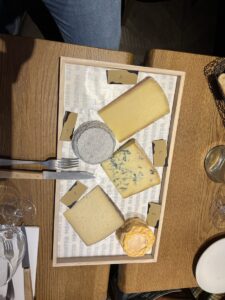 In this photo are  those five cheeses that we tasted and then had to idenitify. These cheeses were made in a multitude of different ways hence their different appearances!

I was initially shocked at the amount of the variety of cheeses and the different shapes/methods of making. Once we got all settled, one of the Fromagerie workers tasked us with four different mini-games that tested some of our senses, namely, sight, smell, taste, and touch. One of the mini-games was called “Name that cheese!”, which gave us the opportunity to dive into these delicious cheeses and taste the cheeses. I was so excited to try something new, especially to try cheese from an authentic place that makes its own cheese. This excitement, however, was short-lived as reality hit me, and quickly noticed that the latter cheeses were more bitter and left a stronger aftertaste. One of my teammates actually “tapped out” at the third cheese and couldn’t finish the last one because the taste was too gross and too intense. I, however, continued to taste test all of the cheeses which was a big mistake on my part because the last two kinds of cheese were way too bitter for my liking. I found myself going back to the first two kinds of cheese (along with many sips of wine and water) to get the bitter aftertaste out of my mouth. My body could not stomach the last two kinds of cheese and i was wondering why as i had never looked/read much into the science of disgust

Prior to researching into disgust and taste topic, I knew that taste is something that has benefited humans and animals alike, as it can detect poisons and other harmful materials. Upon further research into this topic, I found one study that was specifically pertaining to cheeses. In this study researchers conducted a taste test on a multitude of foods and found that cheese actually had a higher proportion of individuals who were disgusted by cheese than by other food categories. They found that odor and sight were the two prominent senses in establishing this disgust, as they activate the GPi/GPe and SN, indicating that these structures may also encode disgust (along with reward) and detect the aversive properties of food (Royet et al., 2016). This made so much sense because the last cheese we were tasting/identifying smelled off and looked so strange to me, so no wonder why i had a hard time eating them. Maybe in the future if i should ever try to taste those last two cheeses again, id like to be blindfolded with my nose covered to see if this changes anything. Nonetheless, this cheese excursion was such a unique and a very french experience. 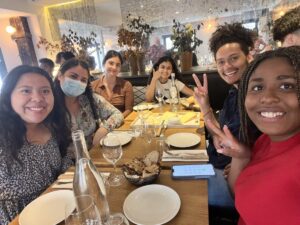 Say cheese! Here is a photo of me and friends cheesing (siezing) the day.

PS: Sorry if this post was too cheesy with a gouda-mout of cheese puns 🙂

One Reply to “Taking it Cheesy…”