Hello and welcome to a Virtual Walkthrough of the physical exhibit “History of Teaching Medicine at Emory University” located at the Woodruff Health Sciences Center Library. Due to Covid-19  we’re doing a virtual walk-through of our current exhibit. We’ll be looking at the exhibit case by case, continuing with Case 3 this week. 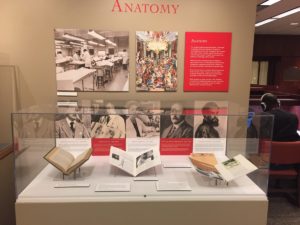 For medical students past and present, mastering human anatomy is an essential element in treating patients, and this knowledge is applied every day throughout their careers. The system of the muscles, vessels, and nerves are vast areas of study and require in depth memorization and understanding of seemingly infinite details, all coming before one puts their knowledge of human anatomy into practice.

Before the Emory School of Medicine was realized in 1915, its predecessor colleges were using cadavers in their anatomy classes.While a donated organ can save the life of another, a body provides the foundation to save many more.Through the use of cadavers, medical students discover hands-on that all human bodies are unique through various factors such as gender and health status. Students can also see the pathological processes of tumors and enlarged organs, seeing the effects of disease firsthand.And finally, a medical student often shares an appreciation to the donor, because donating one’s body for medical education is advancing the knowledge of tomorrow’s healthcare leaders.

Having been offered the chair of surgery and anatomy at the University of Padua on the day of his graduation from the same school, Vesalius soon began his own research on human anatomy. Published when he was 29, Vesalius’ work De Humani Corporis Fabrica presents a careful examination of the organs and the complete structure of the human body. Using human cadavers instead of animals, Vesalius contradicted many conclusions made by Galen, the famous Greek physician and philosopher whose work stood unquestioned for 1500 years. Vesalius is known as the founder of modern human anatomy, and this book forever changed our understanding of the human body.

After earning his medical degree from the University of Virginia in 1876, William P. Nicholson came to Atlanta to become dean and professor of anatomy at the Southern Medical College; he would later serve as professor of anatomy and clinical surgery at theAtlanta College of Physicians and Surgeons. In 1892, Dr. Nicholson performed the first appendectomy in Georgia at Grady Memorial Hospital, where he served as surgeon. He was also a surgeon atWesley Memorial Hospital and St. Joseph’s Infirmary until his retirement in 1913.

From 1943 until her retirement in 1981, Betty Edwards was professor of anatomy and taught microscopic anatomy to medical and dental students. Dr. Edwards was known for her experiments with gravity and its effect on the growth of plant and animal tissues. Her research with Dr. Stephen W. Gray led to a contract between Emory and NASA to develop wheat seedling experiments for a biosatellite project. In addition to teaching at Emory, Dr. Edwards consulted with NASA and was recognized as the 1968 Woman of the Year in the Professions of Atlanta.

At 36, Jerome Sutin became the chair of the Department of Anatomy at Emory, a position he held for the next 30 years. In the course of his academic career, Dr. Sutin influenced the disciplines of neuroscience and cell biology. He made significant contributions to our understanding of the brain, ranging from the hypothalamus to the cerebral cortex, and varied study techniques such as electrophysiology, fiber degeneration, and pathway tracing. In 1994, Dr. Sutin received the Henry Gray Award, the highest honor of the American Association of Anatomists.

An author of 15 books and over 300 scientific papers, John Skandalakis began teaching anatomy courses at Emory University School of Medicine in 1956. In 1977, he became the Chris Carlos Professor of Surgical Anatomy and Technique, and he was named a distinguished professor in 1980. In 1984, Dr. Skandalakis founded the Carlos and Davis Center for Surgical Anatomy and Technique, “which strives to provide education in human macro anatomy in order to create surgeons and surgeon scientists who understand and respect the anatomic basis of modern surgical care.” 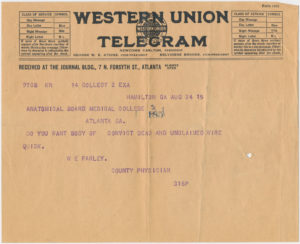 Prior to the establishment of the Georgia Anatomical Board in 1923, the management of human cadavers was a haphazard process. Undertakers, hospitals, and Georgia country officials often telegraphed local medical colleges looking for anyone to take deceased human bodies, who were often unidentified. The Georgia Anatomical Board provided much needed oversight of the respectful distribution of cadavers. 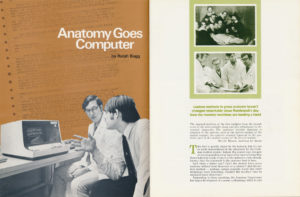 In 1971, Emory School of Medicine explored using computers to teach gross anatomy to students. The argument was that the conventional “lecture-lab-notebook” system did not address the individuality of each student. Dissecting a cadaver required an inordinate amount of mechanical activity that varied among students, and the effectiveness of lectures differed with more visually oriented students.In an attempt to keep students from being tied to the pace of the overall class, the computer-assisted method was implemented.Ultimately, the computer, operating on logical principles, effectively tutored students in systematic problem-solving. But as Dr. Robert Ashworth stated, “dissecting the cadaver has always been a valuable learning experience and will always have some place in medical education.” 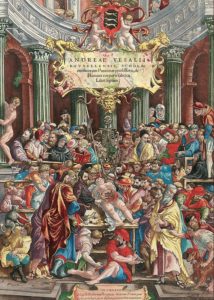 In February 1930, Myrtle Tye, librarian of the A.W. Calhoun Medical Library, was offered a unique chance to purchase a 1543 first edition of Andreas Vesalius’s legendary book De Humani Corporis Fabrica. Using donations from faculty, students, alumni, and from the general public, the first edition was purchased for $490.48. The first edition is housed in the Stuart A. Rose Manuscript, Archives, and Rare Book Library and is available for viewing by appointment. 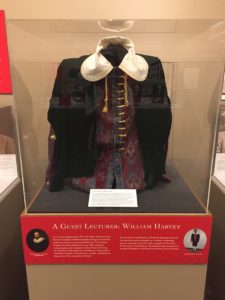 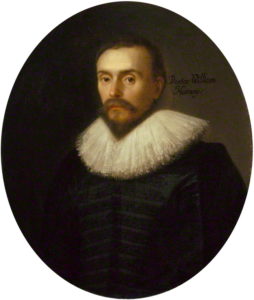 During the cardiology lecture for medical students, Dr. Kyle Peterson would lead a procession into the classroom, music playing, and under a bit of pomp and circumstance, to announce, “We’re proud to have William Harvey here as our guest lecturer!” Dr. Mark Silverman would appear, wearing attire similar to the famous 17th century English physician. From there, Dr. Silverman spoke about the advancements in medicine using the works of Galen and Vesalius, before abruptly taking off his costume and proceeding to a modern cardiology lecture wearing a tee shirt with a graphic of the heart. At the close of each lecture, the students were treated to a viewing of Vesalius’ 1543 book De Humani Corporis Fabrica, or “On the Fabric of the Human Body.” 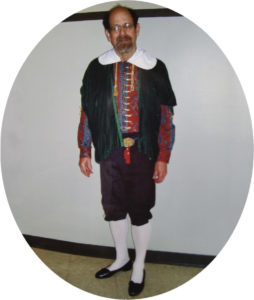 Thank you for viewing our virtual tour!

Collections with materials in this exhibit: