Every year, on January 1st, previously copywritten works enter the public domain and are free for everyone. This blog is an abbreviated version of  The Center for the Study of the Public Domain at Duke Law School entry, “January 1, 2021 is Public Domain Day: Works from 1925 are open to all!”

By Jennifer Jenkins, Director of Duke’s Center for the Study of the Public Domain

In 2021, there is a lot to celebrate. 1925 brought us some incredible culture. The Harlem Renaissance was in full swing. The New Yorker magazine was founded. The literature reflected both a booming economy, whose fruits were unevenly distributed, and the lingering upheaval and tragedy of World War I. The culture of the time reflected all of those contradictory tendencies. The BBC’s Culture website suggested that 1925 might be “the greatest year for books ever,” and with good reason. It is not simply the vast array of famous titles. The stylistic innovations produced by books such as Gatsby, or The Trial, or Mrs. Dalloway marked a change in both the tone and the substance of our literary culture, a broadening of the range of possibilities available to writers, while characters such as Jay Gatsby, Hemingway’s Nick Adams, and Clarissa Dalloway still resonate today.

How will people celebrate this trove of cultural material? The Internet Archive will add books, movies, music, and more to its online library. HathiTrust will make tens of thousands of titles from 1925 available in its digital repository. Google Books will offer the full text of books from that year, instead of showing only snippet views or authorized previews. Community theaters can screen the films. Youth orchestras can afford to publicly perform, or rearrange, the music. Educators and historians can share the full cultural record. Creators can legally build on the past—reimagining the books, making them into films, adapting the songs.

Here are some of the works that will be entering the public domain in 2021. (To find more material from 1925, you can visit the Catalogue of Copyright Entries.) 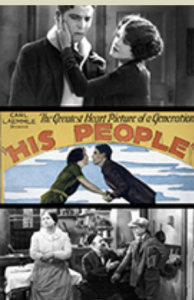 (*Yes, there was a film called Lovers in Quarantine, though it was a comedy, and they only had to quarantine for a week.) Public Domain Day 2021 by Duke Law School’s Center for the Study of the Public Domain is licensed under a Creative Commons Attribution-ShareAlike 3.0 Unported License.