The Voter Education Project (VEP) served primarily as a funding source for voter registration and education programs around the South. VEP collected financial and administrative reports from the projects that they funded, but they also collected flyers, posters and other printed ephemera produced by those organizations, or produced for elections in those areas. 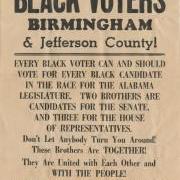 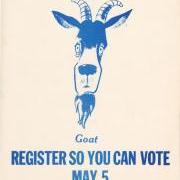 These images are both from Alabama, one for an organization supported by VEP, and one for specific candidates. As a government funded organization, VEP could not fund political campaigns, but followed the elections of black candidates. 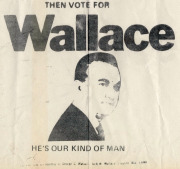 VEP also collected material on political candidates explicitly opposed to voting rights for African-Americans, including the notorious race-baiter Alabama Governor George Wallace. Wallace was a polarizing figure in Southern politics of the time, and the poster is one example of the backlash to African American voter registration efforts in the South. VEP could respond to these campaigns by reminding voters what was at stake with each election.

The thumbnail for the Wallace poster links to the unedited, original image which contains strong, potentially offensive language. For more information on Wallace and the role he played in southern politics, including his eventual renunciation of segregation and racism, please visit his Wikipedia page (http://en.wikipedia.org/wiki/George_C._Wallace).

VEP staff and supporters promoted voting rights efforts at events all over the South. 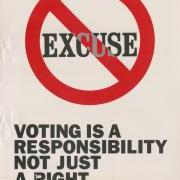 Over time, as funding became scarce, VEP turned to running specific voter education campaigns from their offices in Atlanta.