Fifty-five years ago, Andrew Jackson Young, Jr. was ordained as a minister at the Central Congregational Church in New Orleans. The eldest of two brothers, Young was expected to follow his father’s footsteps and become a dentist. After graduating from Howard University in 1951 (age 19), he struggled to figure out his path in life. That summer, Young had a spiritual awakening on the top of King’s Mountain in North Carolina. Later, he attended a retreat, volunteered with the United Christian Youth Action, and took introductory classes at Hartford Theological Seminary. Also influenced by Nicholas Hood, minister at Central Congregational Church in New Orleans, by the end of 1951 Young knew he wanted to be a minister.

During his coursework at Hartford Theological Seminary, Young filled his time with many activities. He preached at local churches, and in the summer of 1952 Young worked as an assistant for a church in Marion, Alabama, where he met Jean Childs, his first wife of 40 years. He also joined Jean on her Church of the Brethren fellowship to work in an Austrian refugee camp and worked at the Convention of the South of the Congregational Churches. His first ministerial post was in the summer of 1954 at Bethany Congregational Church in Thomasville, Georgia. Upon graduating from Hartford Theological Seminary and receiving his ordination in January 1955, he returned to Thomasville and also served Evergreen Congregational Church in Beachton, Georgia.

As a result of his work at various churches and organizations in the 1950s, Young’s awareness and interest in civil rights activism grew. Raised in a middle-class neighborhood of New Orleans, working in rural areas offered him a new and different perspective. In 1956 Young organized his first voter registration drive in Thomasville, a project he continued in many cities and states through his work in the Southern Christian Leadership Conference (SCLC) and campaigns for Congress in the 1970s. He participated in a Prayer Pilgrimage in Washington D.C. in 1957, the same year he first met Dr. Martin Luther King, Jr.

Also in 1957, Young received an offer to be the associate director of the Department of Youth Work of the National Council of Churches. Already involved with the Christian Youth Action and having conducted a lot of outreach activities with Thomasville youth, he accepted the position and stayed until 1961, when he joined the SCLC. Young’s work included traveling around the country to help “young people grow in grace and understanding of the world in which they would live and lead.” He also helped develop the television series “Look Up and Live” and attended meetings of International Youth.

Though Young worked as a Civil Rights activist, Congressman, Ambassador, Mayor, and business and community leader, he remains a minister. He has conducted marriages (including Arthur Ashe), funerals, and given sermons in churches and synagogues all across the country, while staying involved in the First Congregational Church in Atlanta. The Andrew J. Young Papers include some of his seminary coursework, programs and bulletins from his speaking engagements, handwritten notes and sermons, and other material related to his role as a minister. The Andrew J. Young Papers are currently closed to researchers and are expected to be open in late 2010.

The Auburn Avenue Research Library on African American Culture and History is the first library of its kind in the southeast offering specialized reference and archival collections for the study and research of African cultures. For more information visit:  our website. 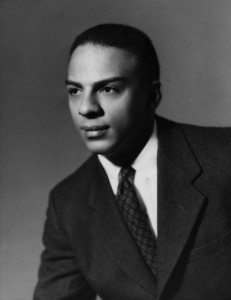 “Working for Freedom:  Documenting Civil Rights Organizations” is a collaborative project between Emory University, the Auburn Avenue Research Libraryon African American Culture and History, the Amistad Research Center at Tulane University, and the Robert W. Woodruff Library at Atlanta University Center to uncover and make available previously hidden collections documenting the Civil Rights Movement in Atlanta and New Orleans.  The project is administered by the Council on Library and Information Resources with funds from the Andrew W. Mellon Foundation.