Students, faculty, and staff returning to the Emory campus this fall can take a vicarious trip to the moon with the Apollo 15 exhibit on Level 3 of the Robert W. Woodruff Library. 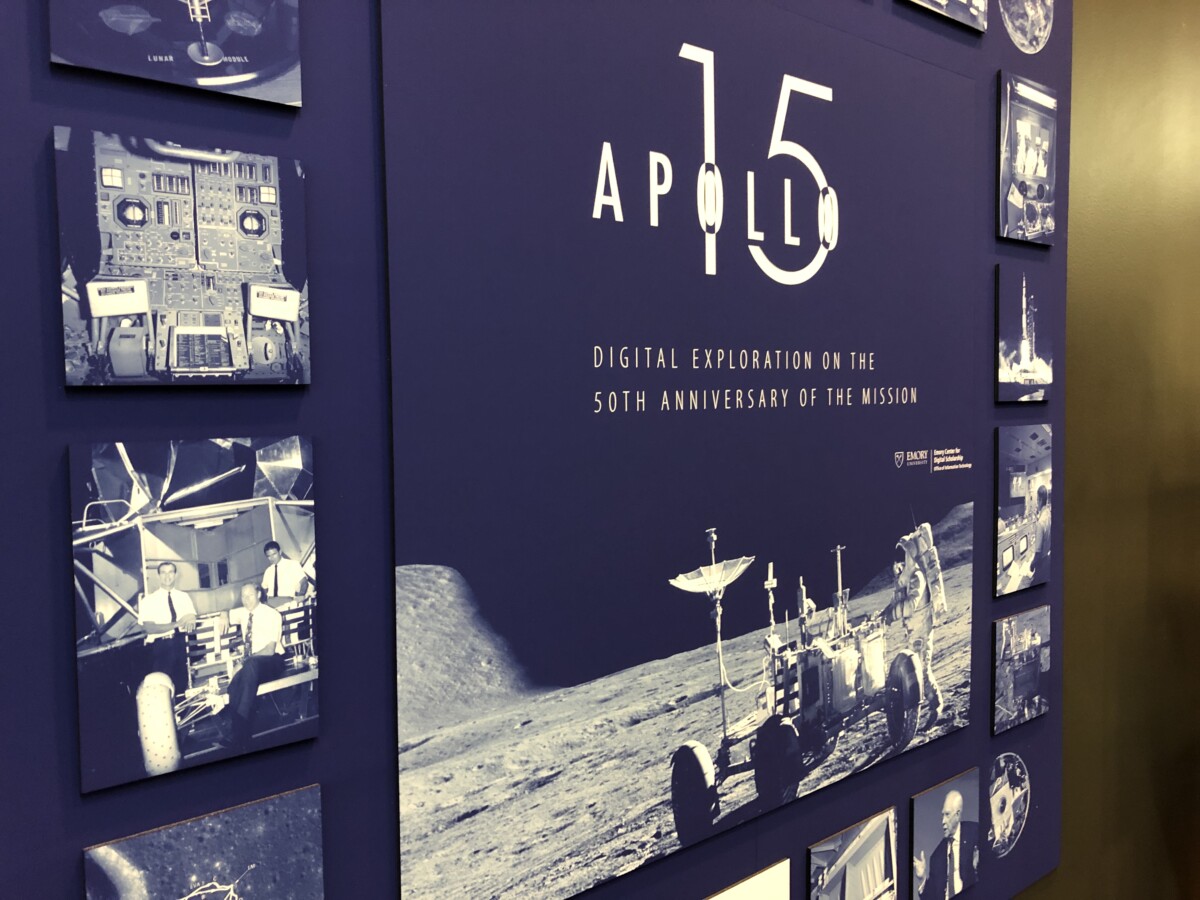 Scenes from the exhibit “Apollo 15: Digital Exploration on the 50th Anniversary of the Mission,” now on display outside the ECDS entrance and in the rotunda on Level 3 of the Woodruff Library on Emory’s main campus. Photos courtesy Woodruff Library at Emory University.

“Apollo 15: Digital Exploration on the 50th Anniversary of the Mission” was fully completed as Emory returned to classes August 25. The exhibit partially opened with some materials on July 26 to celebrate the 50th anniversary of the Apollo 15 lunar launch. That day also marked the launch of the Apollo 15 Learning Hub, a digitized collection that includes flight notes, cue cards, and photographs, as well as a 3D rendering of the lunar module, created by the Emory Center for Digital Scholarship (ECDS).

Materials on display include items from the David R. Scott and Anne Lurton Scott papers, placed with the Stuart A. Rose Manuscript, Archives, and Rare Book Library earlier this year by the couple’s daughter, Dr. Tracy L. Scott, senior lecturer in Emory’s sociology department. David Scott, a colonel in the Air Force, was the mission commander for the Apollo 15 flight.

“One of the goals with the Hub, the papers at the Rose and the exhibit is to help people understand a scientific event in its historical time,” Tracy Scott said. “This is meant to not only explain the scientific discoveries, but also to help situate this event and all of the lunar program in the time period in which it occurred. We want to bring in more of the humanities and social science aspects of this historical time period.”

Starting outside the ECDS entrance and leading down the hallway into the Level 3 rotunda and back, the exhibit begins with panels of photos depicting the family life of the astronauts who lived in the NASA neighborhoods. One picture from the Scott family collection shows Tracy Scott and the other children of Apollo 15 crew members listening to President Richard Nixon in rapt attention after a dinner for the families at the White House. 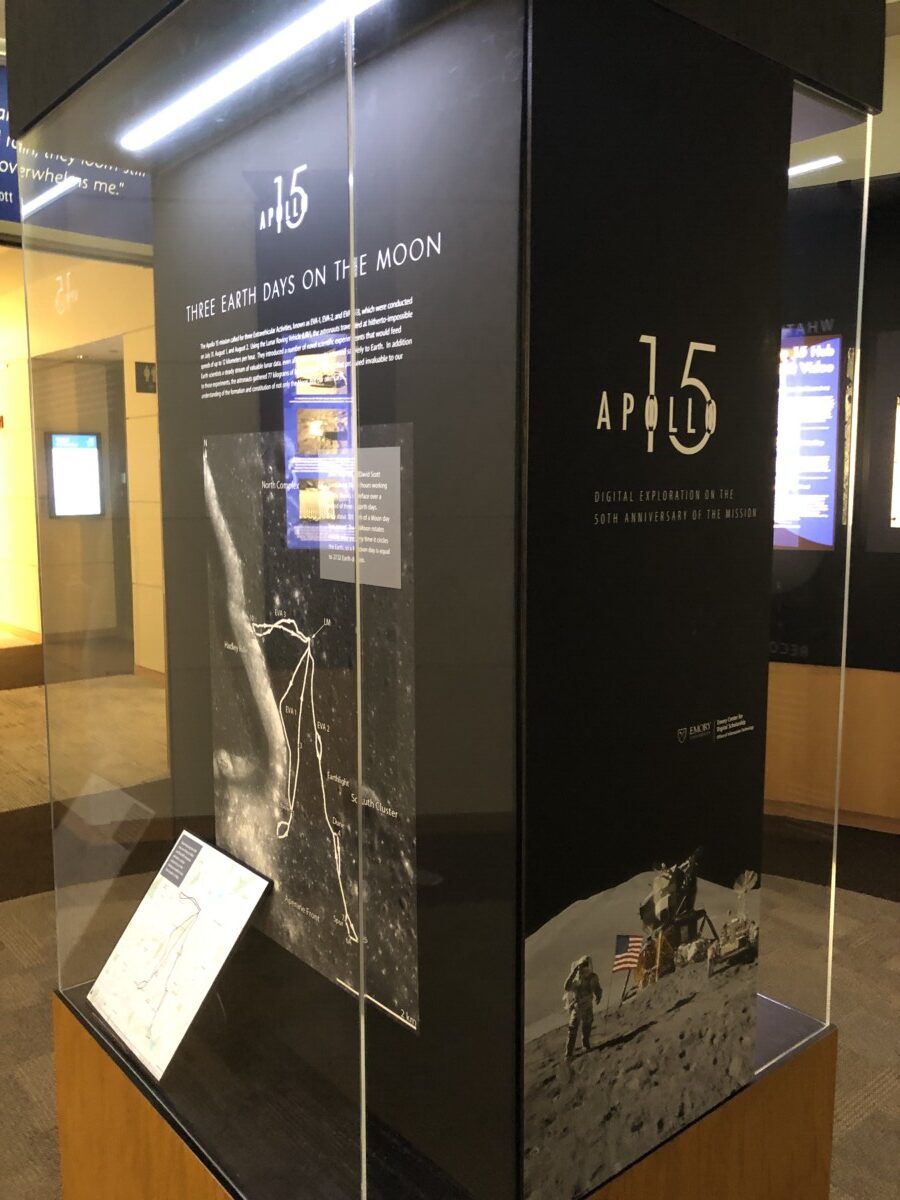 Other panels feature NASA photos of the Apollo 15 astronauts and the mission; flight checklists and cue cards; launch diagrams and photos; photos and diagrams of the astronauts’ excursions in the Lunar Roving Vehicle; and splashdown photos.

In the center of the rotunda, a ceiling projector displays images that include an animated 3D model of the lunar surface, giving a planetarium-like experience and providing a dramatic setting for learning about the images and science produced by the astronauts during their three earth days of exploration on the moon.

Exhibit visitors will also find information about how the Apollo 15 Learning Hub was created, including details of the 3D digital modeling work created by ECDS’s visual information specialist Dr. Arya Basu and visual design specialist Ian Burr, which included the Falcon lunar module interior as well as the lunar environment.

Curators for the exhibit – Dr. Joanna Mundy, ECDS digital projects specialist, and Sarah (Sadie) Warren, an ECDS graduate assistant and a PhD candidate in philosophy – were also highly involved in the Apollo 15 Learning Hub, Mundy as the project coordinator and Warren as the inaugural David R. Scott Fellow.

Mundy said working with the library exhibitions team, Tracy Scott, and the rest of the ECDS Apollo 15 Learning Hub team to create the physical exhibit was rewarding. “This exhibit has been a team effort, bringing together a variety of skills, and I really enjoyed getting to work with everyone,” Mundy said. “We are excited for the exhibit to be on display now, and we are happy to share these wonderful resources with the students.”

Scott papers at the Rose Library

The David R. Scott and Anne Lurton Scott papers at the Rose Library include many more items documenting the lives of Commander Scott and his family such as correspondence, photographs and photo albums, printed material, memorabilia, reel-to-reel audio tapes, and audio cassettes. 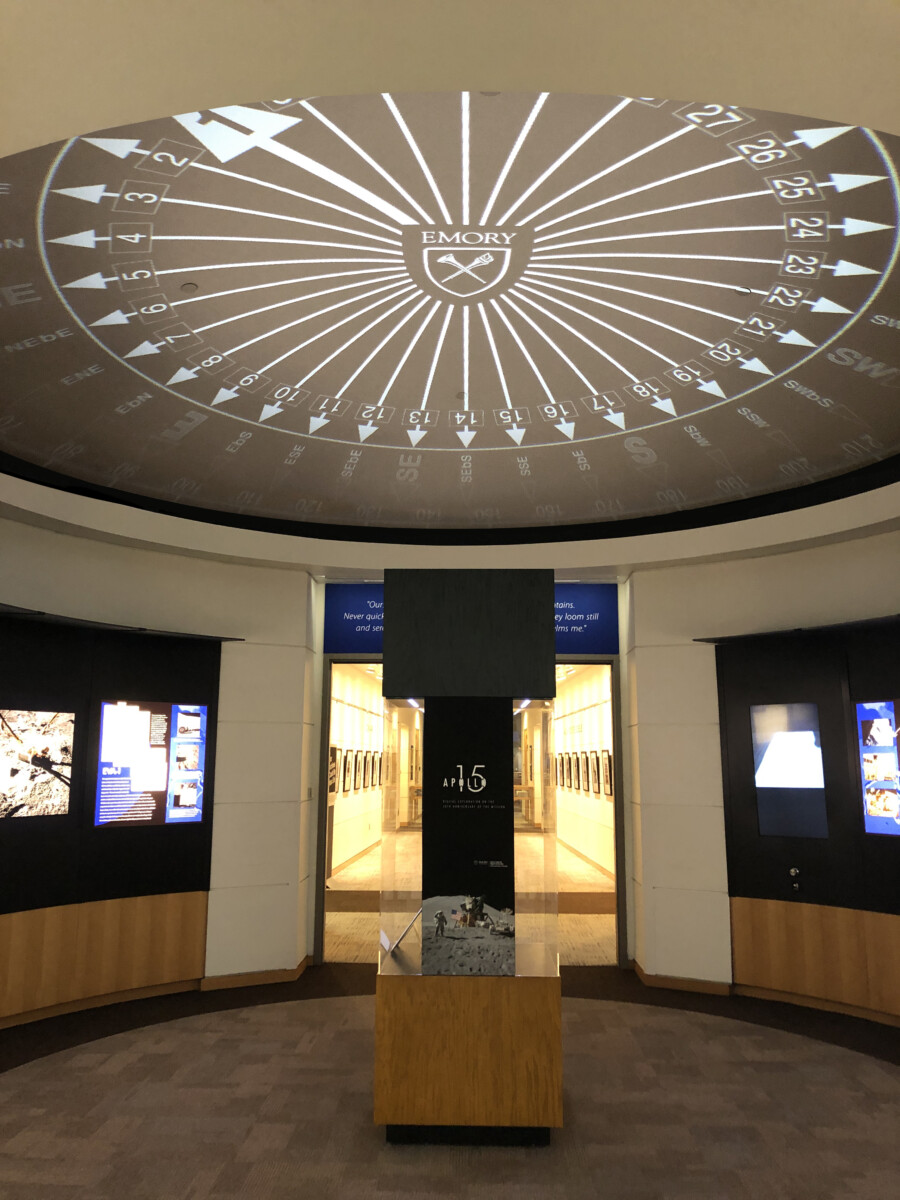 Tracy Scott will also teach a course in spring 2022 titled “A Sociology of the Apollo Era.” The course will explore social and historical contexts of the Apollo era and the organizational culture of the early days of NASA. Students will work with primary source materials from the Apollo 15 Learning Hub and the Rose Library collection, and they will visit the exhibit to learn about the family and work life of a NASA astronaut in the early 1960s.

The exhibit will remain in place through May 2022.