MARBL was fortunate to recently receive a fascinating and rather gruesome gift in the form of the Atlas of the Diseases of the Skin by H. Radcliffe Crocker, published in Edinburgh in 1896. This large format work is lavishly illustrated with color depictions of many stomach-turning skin diseases. 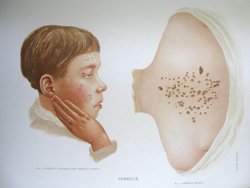 Before the ability to reproduce color photographs scientific atlases such as this were used as reference books for the education of physicians. MARBL’s copy is particularly special due to its condition and housing. Initially the work does not look like a book at all as it is housed in a very large and heavy wooden box. Opening the box reveals not the expected two bound volumes but the work as it was originally issued in 16 parts each bound in a cheap paper cover. Copies in original parts like this are rare as they were meant to be bound together in two volumes once the set was complete. Title pages for both volumes were included in the final part. The reason why the original owner, a Dr. Webb Fowler of Coventry, England, had an expensive box fabricated rather than having them bound is unknown but he undoubtedly wanted to protect the substantial investment the set represented. 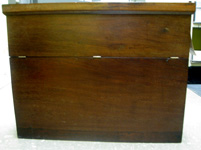 Outside of Box Holding the Atlas of the Diseases of the Skin, 1896

Inside of Box Holding the Atlas of the Diseases of the Skin, 1896

At one guinea or 21 shillings each, the entire set cost sixteen guineas or over £6,000 in today’s money, based on comparing average earnings. This work also represents a limitation of digitized images of books- it would be hard to digitally capture the splendid wooden box!