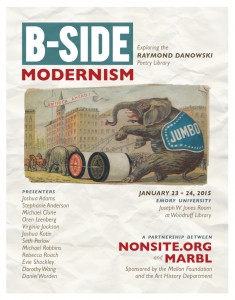 Join us January 23 + 24, 2015 for the B-SIDE Modernism Conference in the Jones Room, Woodruff Library (10am-6pm) For a detailed schedule, click here: http://nonsite.org/events

The last 50 years of literary scholarship on modernism have resulted in some vital realignments of the canon, expanding and challenging earlier visions of what modernism is and isn’t.  In the 70s and 80s, for example, and particularly through the interventions of significant avant-garde poetic movements such as Language writing, writers who had remained mainly on the sidelines of the canon – including, for example Gertrude Stein, Laura (Riding) Jackson, Louis Zukofsky, George Oppen, Lorine Niedecker – rose to new prominence, resulting in a kind of counter-canon to the more familiar nexus of Pound, Yeats, Eliot, and Stevens.  In the 1990s, working in the wake of the New Historicism and increasing institutional support for the critical study of postcolonialism, race, gender, sexuality, disability and other emerging ascriptive categories, scholars of modernism saw the formation of a “new” modernist studies that would widen the net even further, resulting in in 1999 in the foundation of the Modernist Studies Association and its affiliated journal (Modernism/Modernity) and annual conference.

The Raymond Danowski Poetry Library at Emory University , with its unparalleled holdings in Modern and Contemporary poetry has proven to be an ideal resource in furthering these kinds of efforts, as we have already begun to see in the superbly organized exhibitions and reading series curated by Kevin Young.  These efforts to build on the resources of the Danowski Library have been (and we hope, will continue to be) vital to modernist studies, but we also see in the collection a very different kind of opportunity and challenge.

Danowski’s synoptic ambition—to collect literally all poetry in English published in the 20th century, including the independent journals, short-run chapbooks and broadsides that gave Modernism its distinctive energy—has created an opportunity to examine the materials out of which our accounts of the century – both the longstanding ones and the most recent efforts to revise them –have been made, but without the influence of a shaping hand.

In June of 2014, nonsite.org, , with the support of the Mellon Foundation, funded four scholars to do research in the collection. Now, over the course of two intensive days (January 23-24, 2015), the “B-Side Modernism” conference will be an occasion to investigate the divergences among received accounts of modernism.  We view “B-Side” as a chance to open up a major archive to meaningful public conversation. Our conference, “B-Side Modernism,” takes the shapelessness of “everything” as a provocation to investigate the divergences between canonical accounts of modernism in poetry, music, philosophy and art, and to explore the many roads not taken, whether they manifest in the unedited arc of a career, in the one-off achievement, or the unclassified ephemera of a moment.  What else might modernism have been? 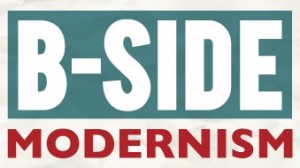