You may associate summer vacations with relaxation and adventure, but they can also be terrifying. In fact, if you do something really stupid or are unlucky enough to wind up in the wrong place at the wrong time, you might not return home alive.  Prepare for the worst by checking out these DVDs from the Music and Media Library.

Vacations offer a rich vein of horror and thriller movie material precisely because we are more vulnerable away from home. Outdoor locations and small towns also allow for shooting on a tight budget. Some of the better-known films focusing on vacations and travel include Nicholas Roeg’s brilliant Don’t Look Now (1973), Sam Raimi’s ferocious The Evil Dead (1981) and The Evil Dead 2 (1987), and most recently Drew Goddard’s all-too-clever meta-horror The Cabin in the Woods (2012), scripted by Joss Whedon. Not all the older films listed below are as well known, though they have earned cult reputations over the years. 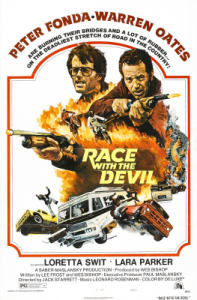 Race With The Devil (1975). Small-town Texas has never looked as menacing as it does in Race With The Devil. Two couples traveling through Texas in an RV witness a Satanic ritual murder, but when they report it the authorities refuse to take them seriously. Now the band of Satanists are after them, and any one of the locals they encounter could be a member. This was one of many theatrical films and made-for-TV movies in the Seventies that depicted Satanism or the occult, most likely capitalizing on the success of Roman Polanski’s Rosemary’s Baby (1968), the Manson Family murders, and widespread media publicity at that time about Anton La Vey’s Church of Satan. It also may have had something to do with the dark national mood after Watergate. The film climaxes with some truly spectacular car chases; its memorable cast includes Peter Fonda, Warren Oates, and Loretta Swit. Available as a double feature with Dirty Mary, Crazy Larry (1974) on DVD 17346. 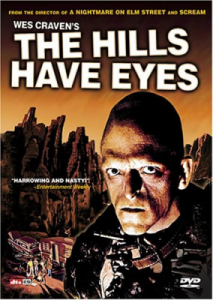 The Hills Have Eyes (1977). Wes Craven first earned notoriety on the drive-in circuit with Last House on the Left (1972), a crude but overwhelmingly bleak revenge thriller supposedly inspired by Ingmar Bergman’s The Virgin Spring (1960). The Hills Have Eyes instead takes its cue from the legendary cannibalistic clan headed by Sawney Bean in Scotland. Updated to the present-day, the film depicts a vacationing family under siege by desert cannibals. In his classic book Hollywood From Vietnam to Reagan (1976, revised 2003) the critic Robin Wood provocatively argues that The Hills Have Eyes, like some other important horror films of the Sixties and Seventies, offers an ideological critique of American society through the metaphor of the cannibalistic family. DVD 2458. 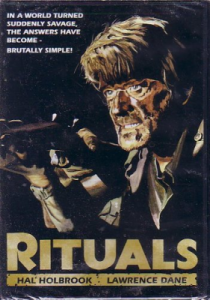 Rituals (1977). Also known as the The Creeper, this Canadian production is clearly inspired by John Boorman’s Deliverance (1972). But it is, if anything, an even more ruthless take on masculinity in the wilderness. A group of doctors (led by Hal Holbrook, in an atypical role) goes on a camping trip in the Canadian wilderness, only to have their shoes stolen overnight by a stranger who seems to be targeting one or more of them specifically. The stranger’s pranks become increasingly violent, setting off a deadly confrontation. Although this film barely received distribution during its original release, it has acquired a following over the years despite being heavily cut on television and suffering under poor VHS transfers. The new DVD by Code Read makes it possible for the first time in many years, to actually make out what happens in the film’s darkly lit climax. Be forewarned, this is grim stuff indeed. DVD 15979. 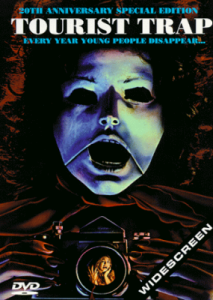 Tourist Trap (1979). A group of teenagers visit a remote “tourist trap” run by the creepy Mr. Slausen (Chuck Connors), only to disappear one by one. Mr. Slausen’s collection of uncanny mannequins, which seemingly come to life, may have something to do with the disappearances. The film’s plot does not make any logical sense, but its increasingly surreal imagery gets under your skin. Tourist Trap was originally released with a PG rating, unlike most horror films released during that period, and it indeed emphasizes suspense and atmosphere over explicit violence. It also sports an effective score by Pino Donaggio (best known for his work with Brian De Palma) and clever references to Psycho and the true-life Ed Gein case. The director David Shmoeller has built a career out of low budget horror films, including the direct-to-video cult item Puppetmaster (1989), but in some ways Tourist Trap is still his most interesting film. DVD 17696. 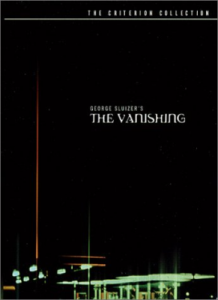 The Vanishing (1988). Forget the Dutch director George Sluizer’s woeful American remake of his own film – the original Dutch version is uniquely haunting and poetic. When a man’s wife disappears without a trace during their vacation, he becomes obsessed with learning what happened to her. A charming but sinister man claiming to be her kidnapper contacts the husband with an offer to disclose the truth about her fate. The Vanishing is arguably more of a psychological thriller than horror film, but it still ranks among the most chilling films ever made, with a superb performance by Bernard-Pierre Donnadieu as the kidnapper. DVD 1377.