We are mourning the loss of Pellom McDaniels III, curator of African American collections at Emory University’s Stuart A. Rose Manuscript, Archives, and Rare Book Library, who passed away suddenly at his home on Sunday, April 19, 2020. 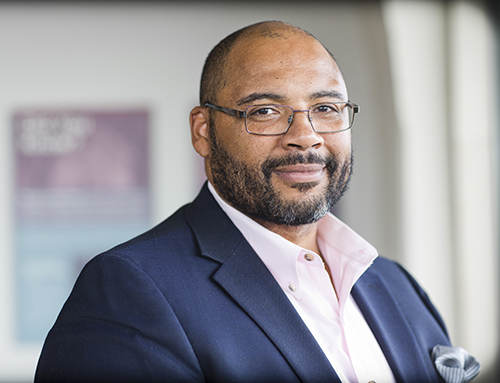 McDaniels earned both his master of arts and PhD in American Studies from Emory University’s Institute of Liberal Arts, after a career as a National Football League defensive lineman for the Kansas City Chiefs and Atlanta Falcons. He then joined the University of Missouri-Kansas City as an assistant professor in history.

One of the major exhibitions of Rose materials he curated was “Still Raising Hell: The Art, Activism, and Archives of Camille Billops and James V. Hatch,” which opened in Emory’s Woodruff Library in September 2016. It featured materials from the Billops-Hatch Archive at Rose, which is known as one of the premier collections of African American history in visual and performing arts.

McDaniels, who was passionate about taking the Rose collections out into the community, helped lead an effort to launch the library’s traveling exhibit program into the Atlanta community schools. The program debuted in 2019 at Martin Luther King Jr. Middle School and opened in its second location, Drew Charter school, this year.

He was also an artist and the author of several books, including “Porter, Steward, Citizen: An African American’s Memoir of World War I” (2017), and “The Prince of Jockeys: The Life of Isaac Burns Murphy” (2013).

“The depth of our sorrow and grief at Pellom’s passing is matched only by our boundless appreciation and admiration for the tremendous gifts and contributions Pellom brought to his life’s work to elevate and celebrate African American history,” Rose Library director Jennifer Gunter King said. “The Rose Library and the world have lost a giant of a scholar and friend, and Pellom’s vision is well established and will continue to guide the future of the Stuart A. Rose Manuscript, Archives, and Rare Book Library.”

“Pellom was an amazing colleague and friend with a drive to look for new ways to provide access to the wonderful collections in the Rose Library,” Dean and University Librarian Yolanda Cooper said. “I will miss his energy, his ideas, and his beautiful heart. His contributions and service to the University and the community are inspiring.”

“I am devastated by the passing of our beloved friend and colleague, Pellom McDaniels,” Burkett said. “Pellom was a giant of a man, not only in stature but in talent, in intellect, and in energy. . . . His loss will be deeply felt throughout the University and the Atlanta community. We were fortunate to have had him with us, but for much too short a time.”

Rosemary Magee, retired director of the Rose Library and a 2019 senior fellow at the Fox Center for Humanistic Inquiry, worked with McDaniels at the Rose and said she had recently been collaborating with him on a project involving artist Benny Andrews and Southern writer Flannery O’Connor.

“Pellom McDaniels was a teacher first and foremost,” Magee said. “He taught all of us, his colleagues as well as his students, about the importance of history, of archives, of stories, of art. I’ve never seen Pellom hesitate for a second when there was an opportunity to bring something new to light, to make important things happen, to show us a way forward. . . . This is the meaning of Pellom’s life among us: to create, to move, to offer insight as well as change. And now, this is our shared responsibility: to move forward with him in spirit.”