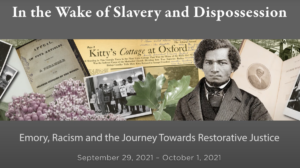 Today is Indigenous Peoples’ Day. The city of Atlanta, where Emory University is located, sits on the ancestral lands of the Mvskoke (Muscogee) Creek Nation. On this day, we contemplate the ways in which the histories and experiences of Native people have been suppressed or ignored to enable to systemic racism and oppression.

Emory Libraries and Emory University recently presented “In the Wake of Slavery and Dispossession: Emory, Racism and the Journey towards Restorative Justice,” a symposium that in part examined the use of slave labor to build several universities, including Emory; and Indian dispossession, particularly in the South.

In honor of Indigenous Peoples’ Day and of Native American Heritage Month in November, we present to you one of these sessions, “Indian Removal and its Legacies,” originally presented Sept. 30, 2021. Click the link to watch the video.

Emory University is located on Muscogee (Creek) land. This panel proposes to provide crucial regional and national context to promote an accurate and thoughtful discussion about how Emory came to occupy this land and why. Indian removal was a sustained, structuring process that unfolded over an extended period of time and changed the course of American history and the fortunes of Black and White Americans, as well as Indigenous people. What most Americans think of as the “Trail of Tears”—forced marches of thousands of Native people from their homes in Georgia, Tennessee, North Carolina, Alabama, and Mississippi—was one part of a policy that also unfolded nationwide for dozens of tribal communities. The four historians on this panel approach Indian removal from a variety of perspectives that offer an introduction to this phenomenon, which is responsible for so much of the way our society looks today.