In my junior year of high school, I visited the Museum of Tolerance with my U.S. History class. Each of us was given a passport representing a child who was caught up in the events of the Holocaust. Our child’s story unfolded over the course of the exhibit, and as we exited, we learned the eventual fate of our child.

My child was murdered at Auschwitz-Birkenau concentration camp. He was six years old.

On the subdued bus ride back to school, my teacher encouraged us to think about why we had visited the museum for a class on American history. I remember feeling sorrow and anger at the injustices that befell the victims of the Holocaust, but also gratitude that the world was a better place now. The Holocaust was one of the greatest tragedies in human history, but by remembering it and honoring those who suffered as a result, we could ensure that nothing like it would ever happen again.

Looking back, I realize now that my teacher wanted us to understand something bigger. 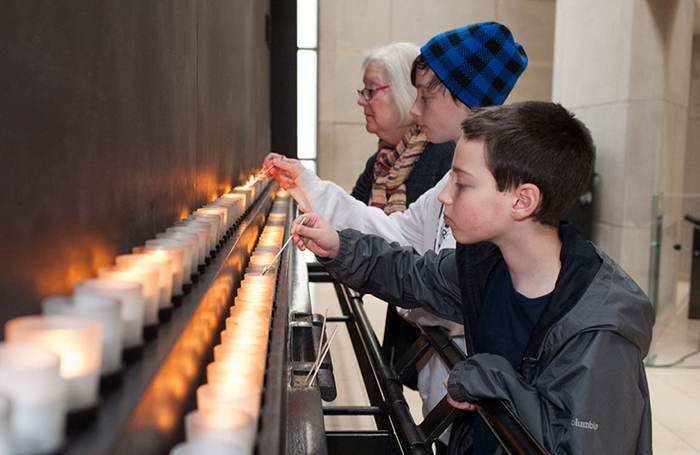 On January 27, we honor those whose lives were forever changed by Nazism on International Holocaust Remembrance Day. Holocaust Remembrance Day, which marks the anniversary of the liberation of more than 6,000 people from Auschwitz-Birkenau by Soviet forces, is a day of international mourning for the suffering of the millions of victims of the Holocaust, but also a day for all of us to reflect on how we can push back against the ideologies of hatred.

The Holocaust felt like a distant tragedy to me on that bus, a horror that humanity had learned from. But I hadn’t completely grasped the truth — simply remembering the Holocaust is not enough. Anti-Semitism isn’t something of the past, it’s something we as Americans need to stand against every day. We saw this on January 6, when insurrectionists wearing “Camp Auschwitz” t-shirts and bearing other anti-Semitic imagery stormed our nation’s capital. Hatred and injustice are part of American history.

Libraries have a sacred role to fulfill in the pursuit of a better world. We fight to protect the truth from distortion and preserve the memory of history. The Holocaust Memorial Museum reminds us of “the urgent responsibility we all share to protect the lessons and legacy of Holocaust history and to defend the truth — now more than ever” (“International Holocaust Remembrance Day”). We must ensure that these stories are never forgotten, but I also hope we all take this day to think about how these narratives inspire us to keep fighting for truth and for justice, not just for the past, but for the present.

Testaments to the Holocaust: Collections of personal accounts of life in Nazi Germany along with photographs, propaganda materials, serials, and other publications from 1933 to after the war. (Requires Emory login.)

Lest We Forget Photo Exhibition: Lest We Forget is a photo exhibition featuring victims of Nazi persecution, conceived by the German photographer and filmmaker Luigi Toscano, and in partnership with Austria, Germany, the European Union and the World Jewish Congress. Toscano visited and took portraits of more than 400 Holocaust survivors and victims of Nazi persecution in the U.S., Germany, Ukraine, Russia, Israel, Belarus, Austria, and the Netherlands.

Behind the Lies of Holocaust Denial: Renowned Emory professor and historian Deborah Lipstadt’s TED Talk on how to battle Holocaust denial and fight for the truth in an era marked by “alternative facts.” Lipstadt encourages us all to go on the offensive against those who assault the truth and facts. “Truth is not relative,” she says.

#WeRemember: From the website: The World Jewish Congress (WJC) and the United Nations Educational, Scientific and Cultural Organization (UNESCO) established AboutHolocaust.org with the goal of providing young people with essential information about the history of the Holocaust and its legacy.

This online tool includes easy to read facts about the Holocaust and survivor testimonies, reviewed by leading academics and experts in the field of Holocaust studies — including those from The Holocaust and the United Nations Outreach Programme — designed to address gaps in knowledge and to counter the misinformation that circulates across social media and other internet forums.

Protect the Facts: From the website: Holocaust denial and distortion attempts to delegitimize the history of the Holocaust by twisting established facts about the size and causes of the Nazi genocide of the Jews. Its transmission undermines attempts to understand and prevent anti-Semitism. Left unchecked, it threatens our shared human rights values and risks the promotion of conspiratorial thinking and violent extremism.

The #ProtectTheFacts campaign seeks to increase awareness of the phenomenon of Holocaust distortion. It empowers individuals to identify and counter Holocaust distortion in society and on social media. The campaign aims to protect knowledge acquired through historical research on the Holocaust by promoting historical literacy and Holocaust education. Only when there is consensus about the basic facts of history, are we able to learn from the past and engage with it in the present so that we can prevent history from repeating itself. This site emphasizes that we must #ProtectTheFacts.