John Wesley Dobbs taught his daughters to never accept segregation unless it was absolutely necessary.  He forbade them from going to segregated theaters or amusement venues because it was “no pleasure to go in the back door.”  He often worked numerous jobs to ensure he could provide for his daughters’ education. All six daughters graduated from Spelman College, obtained master’s degrees, and two earned their doctorates. 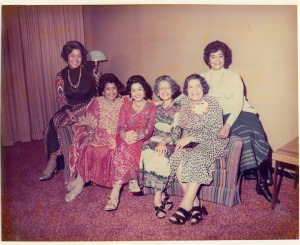 Dr. Irene “Renie” Dobbs Jackson (1908-1999), the eldest daughter, is the mother of the first African American mayor of Atlanta, Maynard Jackson Jr. (1938-2003).  She was the first African American to obtain a library card from the Atlanta Public Library. She graduated as valedictorian from Spelman College (1925) and earned her master’s and doctorate degrees (1956) in French from the University of Grenoble and the University of Toulouse in France, respectively.  She also served as the head of the French department at Spelman and as a chair of the Modern Languages department of North Carolina Central University in Durham, North Carolina.

Millicent Dobbs Jordan (1911-1991), the middle daughter, was a college professor especially interested in Africa, African American history, and African art. During her lifetime, she made frequent trips to the continent of Africa. She received her bachelor’s degree from Spelman College (1933) and her master’s degree in speech and drama from Columbia University (1938). She returned to Spelman to teach English and African American literature. She also taught at Georgia State, Arkansas State, and Morris Brown Colleges.

Josephine Dobbs Clement (1918-1998), the forth born, was a community advocate and civil rights leader focused on the political and social justice movements of Durham, North Carolina. She graduated from Spelman in 1937 College and received her master’s degree from Columbia University the following year. After moving to Durham in the late 1940s, Clement was actively involved in desegregating the YWCA and the League of Women’s Voters. She was appointed to the Durham City-County Charter Commission and also chaired the city’s board of education. She was also a member of the city-county library board in Durham, a director of Durham’s Better Health Foundation, and a volunteer worker at the Durham Children’s House. The Josephine Dobbs Clement Early College High School in Durham was named in her honor.

Mattiwilda “Geekie” Dobbs Janzon (1925- ), the fifth born, is an internationally-known concert performer and one of the first African Americans to sing at the Metropolitan Opera Company in New York. She received her bachelor’s degree in music and Spanish from Spelman College (1946), where she graduated first in her class. She moved to New York and pursued vocal lessons with German soprano Lottie Leonard while studying Spanish at Columbia University, where she ultimately earned her master’s degree (1948). She vowed never to sing to a segregated audience and performed many major festivals and opera houses throughout Europe and the United States. Upon retiring from the stage in 1974, she taught at the University of Texas, Spelman, and Howard University in Washington, D.C.

Dr. June Dobbs Butts (1928- ), the youngest daughter, is one of the first African American sexologists. She obtained her bachelor’s degree in sociology from Spelman College (1948) and her master’s degree in counseling (1950) and doctorate in family life education from Columbia University. She taught in the psychology department at Fisk University, Tennessee State University, and Meharry Medical College. She also worked for the Masters and Johnson Institute, a clinical and research foundation which studied human sexuality. She has authored many books and articles on sex, teenage pregnancy, and AIDS.