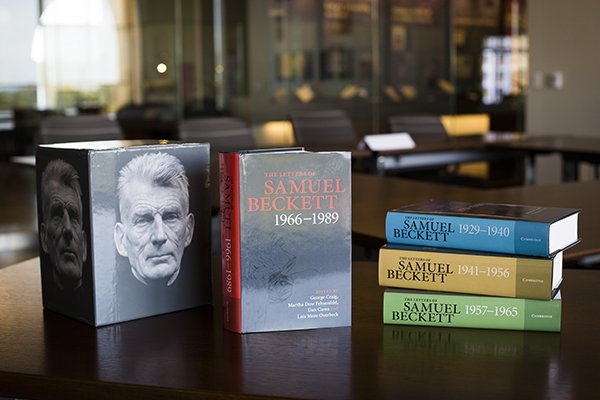 The Delmas Foundation, established by Gladys and Jean Paul Delmas, “promotes the advancement and perpetuation of humanistic inquiry and artistic creativity by encouraging excellence in scholarship and in the performing arts, and by supporting research libraries and other institutions which transmit our cultural heritage.” Furthering the humanities along a broad front, it sponsors “projects that cross the boundaries between humanistic disciplines and explore the connection between the humanities and other areas of scholarship.”

Earlier support from the Delmas Foundation enabled the Beckett Project to establish the Location Register of the Letters of Samuel Beckett in public archives in the United States, Canada, Ireland, Scotland, and England. Further work on the holdings of European and non-western archives was deferred as COVID-19 restrictions made it necessary to close archives abroad.

“We are delighted to resume and complete the work on the Location Register,” said Lois Overbeck, director of the Beckett Letters project. “Not only are we sharing the bibliographical results of the research to edit the letters of Samuel Beckett, but we are assisting archives by confirming their holdings and making this finding aid available as an open access website to support a wide range of future students and scholars.”

“The Letters of Samuel Beckett,” published as a four-volume series (Cambridge University Press, 2009-2016), received wide acclaim as a “model edition.” However, it was a selected edition, and as such, published only about 20 percent of the over 16,000 written by the Nobel laureate Samuel Beckett that were consulted by the editors in public and private archives internationally. This was the impetus for the Location Register, which will provide scholars with bibliographical access to all the letters in public archives, not only those that have been published. Beckett’s is a young archive, so new letters continue to appear. The Beckett Letters project is well poised to continue the collection process and to merge new materials with letters already documented.

The Location Register is a resource for many fields of inquiry beyond Samuel Beckett’s life and work. Primarily, it demonstrates the centrality of archival resources and the interdisciplinary nature of evidence and knowledge that informed the edition of the Letters. Further, it establishes an impetus for archival deposit of privately held collections to expand the preservation and access to such materials.

Concurrently, the Beckett Letters project is creating an open-access Linked Data website based on the Location Register. This offers an interactive index to the rich data content of each Beckett letter in public archives. It also provides a double chronology of Beckett’s life and work and of public events, filmed interviews, photographs, and a mapping of Beckett’s travels. The metadata also includes geonames, VIAFs (Virtual International Authority Files), and links to the public data of the Beckett Digital Manuscript project along with Breon Mitchell’s “Samuel Beckett: A Bibliography” (University of Antwerp), as well as the performance history provided by the Staging Beckett project (University of Reading, UK), and other resources.

Working with the Emory Center for Digital Scholarship (ECDS), the Linked Data project is opening new ground for sharing the research of this major project – one that models a future course for long-term research efforts in many other fields.

“The plan for this project includes experimenting with system architectures and metadata schema that brings forward new scholarship on Beckett’s letters,” said Wayne Morse, ECDS co-director. “This project approach represents a new mode of sustainability for digital scholarship and research data that can be applied to other projects, increasing digital longevity and ensuring access to future generations of scholars.”

The Linked Data Project addresses a central issue of long-term projects for which the published work represents merely the tip of the research iceberg. It is the first step in response to the question of how research steeped in primary and archival sources can be preserved and shared, without compromising copyright restrictions on reproduction of the original documents.

“The ongoing work of the Samuel Beckett letters and the Linked Data Project are of great value to scholars and archivists alike as a model for the digital preservation of primary sources,” says Michael A. Elliott, dean of Emory College of Arts and Sciences and Charles Howard Candler Professor of English.

The Edition of “The Letters of Samuel Beckett” at Emory

The “Letters of Samuel Beckett” project to edit the four volumes of selected letters was affiliated with the James T. Laney Graduate School from 1990 to 2016. Several generations of Emory graduate students in the humanities worked alongside the editorial team (Martha Fehsenfeld, Lois Overbeck, George Craig, and Dan Gunn) both at Emory and in archives internationally; the students gained valuable editing and research experience while pursuing their graduate studies. Since 2016, the Department of English at the Emory College of Arts and Sciences has been the home for the project; dozens of Emory undergraduates have participated in building the data sets with the editors.

Since 1990, the Beckett Letters project has been supported by several grants from the National Endowment for the Humanities, the Florence Gould Foundation, awards from various archives for research, and gifts from many private donors. Emory University has proven its commitment to scholarship as well as its leadership in education by encouraging the engagement of students in the many phases of this project.

Jennifer Gunter King, director of the Stuart A. Rose Manuscript, Archives, and Rare Book Library at Emory University, wrote: “The Location Register brings into public hands the cumulative and exhaustive research conducted by generations of scholars, led by Lois Overbeck, promoting discovery, research, and new scholarship. Their work provides access to all known Beckett letters in public archives and creates a pathway for the deposit of Samuel Beckett letters into repositories in the future. It is a platform for both discovery and preservation, and its importance cannot be overstated.”