Grace Elizabeth Marr Nugent, the first African American nurse to hold the positions of instructor at Teachers College, Columbia, and senior supervisor of nursing education in the New York State Department of Education, was the younger sister of Warren Q. Marr II.

Daughter of Rev. Warren Q. Marr, Sr. and Cecelia A. Marr (née McGee), Grace was born on January 25, 1919 in Pittsburgh, Pennsylvania. She received her early education at Peabody High School in Pittsburgh.  After obtaining her nursing diploma (1941) from Harlem Hospital School of Nursing, she stayed at the school and taught chemistry (1941-1944) eventually serving as director of education (1949-1951).

Grace was hired to teach microbiology at the Teachers College of Columbia University in New York (1944-1949), where she received both her bachelor of science (1945) and master’s degrees (1948).  She was the first African American to hold a position on Columbia’s staff.  In 1951, she achieved another first for African Americans when she became supervisor of nursing education for the New York State Department of Education, a position she held for two years. 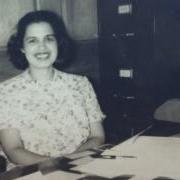 In 1953, when the National Association for the Advancement of Colored Graduate Nurses (NACGN), of which she had been a longtime member, merged with the American Nurses Association (ANA), she became assistant executive secretary (1953-1959) of the combined organization working in the Intergroup Relations Unit. Her responsibility was to travel the country in order to monitor and enforce the group’s race relations program.  Upon leaving her position at the ANA, Grace devoted the rest of her life to “Operation Democracy,” a self-help program she founded to help attain “universal acceptance and understanding of people of all races and cultures.”

The Marr-McGee Family Papers are currently being processed as part of the Amistad Research Center’s Hidden Collections project. The papers largely document the lives and careers of Warren Marr, II, his wife Carmel, his sister Grace Marr Nugent, and related families.