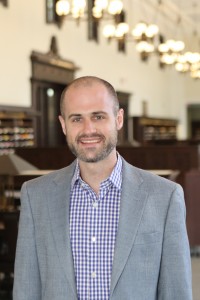 An Interview with Michael Camp

Michael: I grew up in Knoxville, Tennessee, and attended college at the University of Tennessee before completing a master’s degree in Chicago. My favorite book is Robert Heinlein’s Stranger in a Strange Land (1961), a science fiction classic. On campus, I’ve enjoyed playing intramural soccer and basketball. Inside the perimeter, my favorite things about Atlanta are the diversity of neighborhoods, the various venues for live music and sporting events, and the food scene, especially along Buford Highway. Outside the perimeter, I enjoy the state parks scattered in and around the metro area, which are great for hiking.

Woodruff: What are you researching for your dissertation?

Michael: My dissertation examines US energy policy after the 1973 oil embargo. The aftermath of the embargo – which caused long lines at gasoline stations and sometimes fistfights – was the first time that we began to hear terms like “energy security” and “energy independence” popping up in political discourse. Political leaders, especially Jimmy Carter, attempted to reconfigure national energy policy to increase production of domestic energy, but this was more difficult than anticipated, due to the complex competing interests involved with each source of energy. For example, in the case of coal, attempting to increase production involved coal miners, coal mine owners, the railroads on which coal was shipped, and environmentalists. These groups often had divergent interests and sizable political influence, making a coherent policy quite difficult to achieve. My dissertation argues that these failures, along with backlash against environmental regulations perceived to be impeding energy development, helped pave the way for the deregulatory, anti-government rhetoric of the Reagan years.

Woodruff: What interested you about the Woodruff Library Fellowship?

Given that my dissertation relies heavily on the holdings of the Carter Presidential Library as well as various congressional collections, I have a general interest in archives and the preservation of the past. In addition, I have worked as a graduate processing assistant at the Rose Library for the past three years, and was excited that the fellowship would allow me to design, in consultation with staff, a processing project of my own selection, along with related outreach initiatives.

Michael: What will you be working on this year for your Woodruff Library Fellowship?

I will be arranging and describing the papers of Howard Moore, Jr., a civil rights attorney. Moore began his career in Atlanta in the 1960s, then in the early 1970s moved to Berkeley, California, to participate in the high-profile defense of Angela Davis, and then spent the remainder of his career in Oakland. Given the ongoing public focus on issues of race and criminal justice, making Moore’s papers accessible to researchers seems like a timely and important project.