This is the fourth post in a series of interviews conducted by the Woodruff Library with the 2019-2020 Emory Libraries/Emory Center for Digital Scholarship (ECDS) Fellows. Funded by the Laney Graduate School, the library and ECDS award fellowships to advanced graduate students expecting to complete their dissertations by the end of the fellowship period. Fellows are placed within the Woodruff Library, Rose Library and ECDS to work in an area related to their subject specialization or interest, culminating in a formal presentation in the spring. 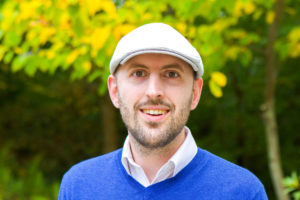 Hi folks! I’m from North Carolina. I grew up in a Cary, which is a suburb of Raleigh. There’s a running joke that Cary stands for “Containment Area for Relocated Yankees,” which I think gives a pretty good feel for the diverse mix of folks in Cary. One of my favorite things to read about is the card game bridge, which I play competitively. There are many amazing books about bridge. One of my favorites is a book called Bridge with the Blue Team, which is full of magical hands played by a team from Italy that dominated the world championships for more than a decade. I’m also in love with a few recent books by David Bird, which have used large-scale data-driven simulations to test, and sometimes overturn, the conventional wisdom about how we play bridge. I like a lot of things about Atlanta, but one of my favorite things as a soccer fan is the Atlanta United major league soccer team, which I consider to be the most exciting team in American professional sports right now. I find the team’s goals and energy simply enthralling; the ambition of the team is to put American soccer on a world stage, and the team is loaded with young attacking players who are a lot of fun to watch.

What are you researching for your dissertation?

Digital fingerprints of human behavior are everywhere, as when people write on social media, shop for products, play games, or search for information. In my research, I ask whether these seemingly innocent everyday behaviors, especially on social media, might reveal deep facts about who we are as people. This work typically involves mining large social media corpora, and then training machine learning models to use the text that people write there to make predictions people’s psychology. In my dissertation, I ask about the cognitive processes people use to mentally time travel into the past and future. I do this by automatically extracting several million references to the past and future from a corpus of web blog posts. I find similarities in the way people talk about the past and future, particularly with respect to the conceptual information that people draw on in these references. The results suggest that people may use many of the same cognitive processes to mentally time travel into the past and future.

I love working with data and code, and the Data Services fellowship allows me to do both!  As a Data Services fellow with Rob O’Reilly, my role is to help students and faculty locate data sources as well as to acquire and clean large datasets – which in the past have included datasets like several months of MARTA ridership or large census-based data. I’m learning a few new tools, primarily the R programming language. I’m also learning a lot about publicly available datasets such as census data. Finally, I’m very excited to be leading a few workshops this Fall. One workshop is an introduction to the Python programming language, which has been my language of choice over the past several years. The Python language is seeing huge growth over the past few years in science, social science, and industry, and I’m excited to show some of the wonderful things you can do in Python. The other, with Rob O’Reilly, is an introduction to Social Media Mining in Python, which is an area I’ve had a chance to think a lot about over my PhD! I’ll show some examples of analyses that have involved more than a billion social media posts, and we’ll also cover some of the nuts and bolts of mining twitter in your own work.