Emory Libraries have purchased several new databases in recent months that will greatly enhance student and faculty research and classroom teaching and learning, and this new blog series strives to highlight each new database individually.

Colonial America provides access to digital copies of all 1,450 volumes from the Colonial Office’s CO 5 series housed at the National Archives (UK). The series contains the correspondence of metropolitan imperial institutions, including the Board of Trade, Secretary of State for the Southern Department (and its 1768 successor, the Secretary of State for the Colonies) with the British North American and Caribbean colonies from 1606 to 1822. 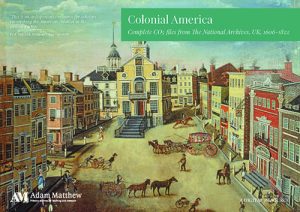 This database promises to open up new lines of research and inquiry for students of the Atlantic World, British Empire, Caribbean, and early America. Jennifer Morgan, a Ph.D. candidate researching slavery, gendered violence, and intersections of law and culture in the British Caribbean colonies and early southern U.S., envisions using Colonial America in her classroom. She notes “the database’s sophisticated search functions and directories not only will provide guidance for students’ research in original sources, but a starting point for thinking about how archives themselves are a part of history and can shape the ways in which histories are understood and written.”