Throughout its 53 year history, the Southern Christian Leadership Conference has applied the tactics of nonviolent direct action to draw attention to issues of social and economic justice and affect change.  By conducting sit-ins, protest marches and other acts of civil disobedience, the organization focused public scrutiny on such problems as segregation, voter disenfranchisement and economic inequality.

In 1982, SCLC began a major campaign to secure the extension of the Voting Rights Act.  Efforts began with a rally in Carrollton, Alabama in January in support of  Maggie Bozeman and Julia Wilder who had been convicted of voter fraud in the state.  Supporters of the women maintained that the two had merely helped people vote and had not knowingly committed any crime.  In February, the organization led a march from Carrollton to Montgomery in support of the women.  A portion of the 1981 march retraced the path of the historic 1965 march for voting rights, a march from Selma to Montgomery during which Alabama police violently attacked marchers on the Edmund Pettus Bridge.  Finally, in April, SCLC launched a pilgrimage from Alabama to Washington, D.C.  By this time, debate over the Voting Rights Act extension bill had divided Congress and opponents of the bill were doing their best to defeat passage.  Supporters marched for two months across five states, conducting voter registration drives and rallies along the way.  When marchers arrived in Washington in June, they were greeted with the news that the bill had passed. 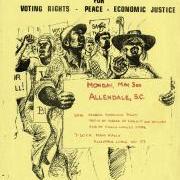 Part of this content is included in the exhibit “One Who Disturbs the Comfortable and Comforts the Disturbed:  Joseph E. Lowery and the SCLC,” on display in the Manuscript, Archies and Rare Book Library at Emory University until August 31, 2010.