The Stuart A. Rose Manuscript, Archives, and Rare Book Library at Emory University expresses deep concern for Salman Rushdie’s well-being and sends every good wish for his recovery from a violent attack last week. 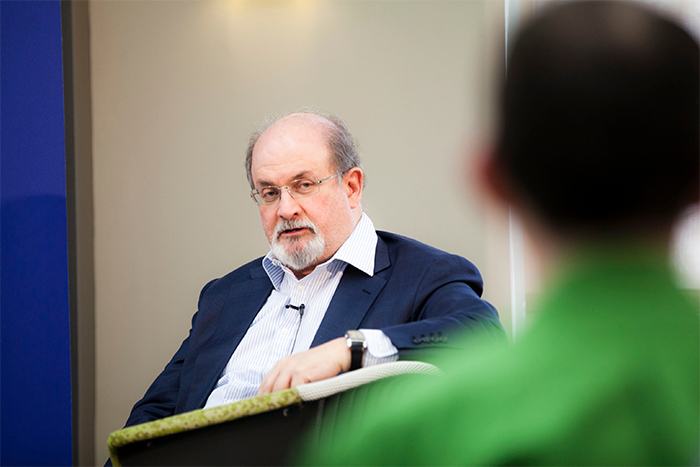 Author Salman Rushdie listens to an audience member’s question during a 2012 conversation about his digital archive at Emory University, where he was a Distinguished Professor at the time. Credit: Emory Photo/Video.

In 2006, when the library acquired the papers of Salman Rushdie, the acquisition marked an important commitment to the long-term stewardship of the thoughts and writings of one of the greatest writers of our time. Rushdie’s papers, documenting the arc of his career as a writer, are a cornerstone of literary and cultural heritage holdings in the Rose Library that, together, help tell the story of our modern world. Our library’s commitment to the preservation of Rushdie’s papers is part of a broader commitment to preserving humanity by promoting “access and learning, equity and justice by documenting, preserving and making accessible distinctive and diverse collections.”

The Rose Library condemns the violent attack on his life and the freedom of thought and expression. Our thoughts and wishes are with Salman Rushdie’s family and every member of our inquiry-driven, ethically engaged, and diverse community.

To view the finding aid for Rushdie’s papers in the Rose Library:

For more about his long relationship with Emory:

You may also engage with Rushdie as we have, through these recorded events and conversations:

Toasts by friends at the launch of the archive in 2010

Salman Rushdie, Christopher Hitchens, Deepika Bahri and Deepa Mehta at Emory: The Only Subject is Love, 2010

India Summit: Art in India with Deepika Bahri and Salman Rushdie in 2012