The Society of Woman Geographers (SWG) was founded in 1925 in order to gather and support women undertaking significant international exploration and research.  Among its distinguished members have been a number of accomplished women, including aviation pioneer Amelia Earhart, anthropologist Margaret Mead, paleontologist Mary Douglas Leakey, and primatologist Jane Goodall.  Now headquartered on Capitol Hill in Washington, D.C., the SWG currently includes approximately 500 members, each of whom has achieved renown in her discipline and contributed tangibly to the world’s knowledge through publication or similar permanent record. As the SWG’s website notes, “Being elected to membership in the SWG is an honor recognizing professional accomplishment and experiences in international travel or expeditions.” 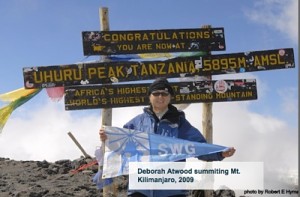 The SWG hosts an international Triennial congress that met recently in Pittsburgh. I was honored to be invited to address this year’s gathering, as Founding Director of the World Shakespeare Project (WSP) and a lifetime member of the SWG.  The women delivering papers represented a broad array of backgrounds and accomplishments.  Both seasoned professionals and current winners of the National Graduate Fellowship awards offered captivating talks that reflect the breadth of the SWG membership.  It soon became evident that all of the presentations were going to be fascinating, whether or not the topic or title initially seemed particularly interesting.  This group of ambitious and dedicated women were extraordinary speakers.

Several of those attending specialize in Antarctic research, including the winner of this year’s Edith “Jackie” Ronne Award, which is named after a former SWG President, who was the first woman to winter in Antarctica.  Ronne died in 2009, but not before returning to Antarctica forty seven years after she ended up there almost by accident, when her explorer husband insisted that she join him, even though she had just packed the dress clothes needed to see him off in Texas.  She spent much of her sojourn in that icy land wearing men’s clothes provided to the expedition by the US Army, who wanted to test the clothing’s suitability for such a harsh environment.  This expedition also included the brief establishment of a clandestine post office, designed to corroborate American activities in this region if it ever becomes open to land claims. At the SWG, we heard a great deal about current conditions in Antarctica, which rely upon the continuation of international treaties that help protect this area from the ravages of tourism and mineral exploration.  We also heard distressing stories from the Arctic, as the Italian Instituto Geografico Polare Director, Dr. Maria Pia Casarini, offered illustrated warnings about the melting ice cap and the climate change dangers becoming increasingly evident in that region.

The SWG encourages a broad interpretation of the concept of “geography,” and this breadth was reflected in the range of talks presented.  One startlingly interesting, though ominous, presentation, was offered by recent PhD Elisabeth Stoddard, who described the perils surrounding the burgeoning hog trade in North Carolina.  In “Assessing the Vulnerability of a Hog Industry Too Big to Fail,” Dr. Stoddard explained how deregulation has led to a massive explosion in the size of the commercial hog population in North Carolina, but that there has been no concurrent increase in the state’s ability to address the ominous potential of devastating epidemics, such as foot and mouth disease outbreaks.  I attended this presentation largely since Dr. Stoddard was on the same panel as the daughter of some Shakespearean colleagues, but found it unexpectedly fascinating, though worrisome.

Other presentations focused on the political, agricultural and social status of maize in Mexico and on the ways that the corn industry shaped American (and world) history.  Dawn Drake, who describes herself as an “economic geographer” spoke about the movement of American farm machine manufacturing centers to the Southeastern U.S.  Ethnographer Edith Mirante gave a passionate account of the dangers facing indigenous “Negrito” populations in Indonesia, while Jane Eppinga offered an historical and sociocultural tour of Arizona’s cemeteries.  In each instance, these talks offered insightful and thought-provoking introductions to topics many of those attending had never encountered previously.

The theme of this year’s SWG Triennial was “Transformations,” so the WSP’s discussion of the ways that electronic communication can change modern international education fit right in.   Even though hogs, maize, and Shakespeare may have no readily apparent immediate connection, the SWG’s emphasis on global research and women’s involvement in important international transformation created an articulate and educated audience who were primed to learn as much as possible from this disparate gathering of accomplished female researchers and explorers.   It is rare for this Shakespearean scholar to spend considerable time with women whose work takes them predominantly to hog farms or Polar encampments, but this Triennial demonstrated the extraordinary value of listening to and conversing with enthusiastic and knowledgeable experts representing widely distinctive fields.   The SWG Headquarters is located on East Capitol Street, just a couple of blocks away from the Folger Shakespeare Library in Washington, D.C.   Both places offer library resources and fellow researchers who personify the value of erudition and of exploration. The WSP may never establish an educational collaboration in Antarctica, but we all benefit from the expansion and dissemination of significant international research.