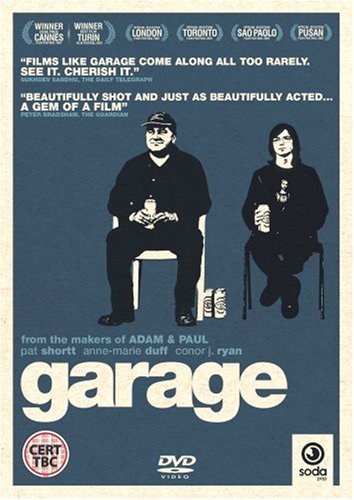 This month, the Marian K. Heilbrun Music and Media Library added to the collection three films from Irish filmmaker Lenny Abrahamson. Adam and Paul (2004), Garage (2007), and What Richard Did (2012) are films of poignant beauty and sharp wit that capture a very modern and introspective view of Irish culture.

Lenny Abrahamson was born in Dublin in 1966. He attended Trinity College, Dublin majoring in Physics and Philosophy while contributing on short films with the Trinity Video Society. After graduating in 1991, he immersed himself in the Irish film and media scene, directing short films and commercials for Irish and British television. In 2004, he released his breakout film, Adam and Paul, a solemn day in the life of two Dublin drug addicts. This moving first feature captures Abrahamson’s knack for dry Beckettian humor and his ability to convey a startling sense of realism. The film was co-written by star, Mark O’halloran, who would proceed to collaborate with Abrahamson on future projects. The film’s other star, Tom Murphy, a lauded Irish actor of both stage and film, passed away in 2007, three years after the film’s release. He is lovingly remembered for his role as Paul as well as several other notable stage appearances in Galway, London’s West End, and Broadway.

Building off of his success with Adam and Paul, Abrahamson moved on to his second feature, Garage, with Mark O’halloran returning as screenwriter. Garage tells the story of a lonely gas-station attendant in the West of Ireland as he struggles to build relationships and find happiness. This subtle and muted film features beautiful performances that render each character startlingly relatable. The film was screened at the 2007 Cannes Film Festival and won the CICAE Art and Essai Cinema Prize. Garage went on to win Best Film at the Torino Film Festival, and Best Film, Best Script, and Best actor at the Irish Film and Television Awards. This remarkable study of loneliness and humanity in the barren Irish countryside is not to be missed.

Abrahamson’s third film, What Richard Did, was released in 2012 and met with nearly universal acclaim. The story of a Dublin teenager searching for balance between his thoughts and his actions offers a snapshot of what it’s like to grow up in a modern city with turbulent conflicts of morality. The film elevated Lenny Abrahamson into the international spotlight with its critical success. However, he has yet to achieve international stardom at the level he has seen at home in Ireland.

The critical attention toward What Richard Did allowed Abrahamson to secure Michael Fassbender as the star in his most recent feature, Frank (2014). The film follows Fassbender and rising Irish star Domhnall Gleeson (son of Brendan Gleeson) as they portray young hapless musicians on the road to genius and success. Fassbender steals the show in the titular role as an enigmatic musician who never removes his full-head mask. The character is modeled after Frank Sidebottom, a popular character of tragic English comedian, Chris Sievey. Frank premiered at Sundance in January, 2014, and was subsequently released in the UK and Ireland on May 9th, and the United States on August 15th. It has been met with significant praise and will likely continue to push Abrahamson along on his current upward trajectory.

Abrahamson’s first three films add a new depth to the Irish side of the library collection by celebrating a beautifully human and modern country. Abrahamson is undoubtedly one of the most exciting directors to watch among Irish filmmakers and Independent filmmakers overall.

My name is Robert Weisblatt, I am a senior undergraduate student at Emory College of Arts and Sciences working towards a double-major in English and Film Studies. During Spring 2014, I was able to spend five months in Dublin focusing on Irish Literature. Although my academic focuses were tied to novels, my personal love of film allowed me to cross paths with Lenny Abrahamson on two occasions. On March 26th, 2014, The Project Arts Centre in Dublin’s Temple Bar kicked off their film and conversation series “Addiction,” with a screening of Adam and Paul. The screening was attended by Lenny Abrahamson and Mark O’halloran, as well as recovering addicts and advocates. Following the screening, Abrahamson, O’halloran, and other honored guests sat on a Q and A panel, and I was fortunate enough to participate and converse with the participants following the discussion. I encountered Mr. Abrahamson a second time, in May, at the Dublin premiere of Frank at the Irish Film Institute. Following the screening , I approached Mr. Abrahamson (who earnestly remembered me) and told him that I would be returning to the US the following week. He thanked me for my visit to Dublin and requested that if I truly was a fan, to please bring back his name and his films and spread the word throughout the States.

Editor’s note: Garage is available in the Music and Media Library as DVD 22954 and What Richard Did is available DVD 23032; please note that they are both Region 2 PAL DVDs. Adam and Paul is currently being cataloged and will be available for checkout shortly. –J.S.