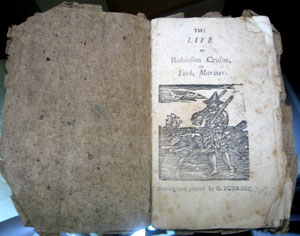 The Life of Robinson Crusoe, of York, Mariner, 1719

Robinson Crusoe is one of the few works of fiction whose popularity has lasted not just decades but centuries. MARBL is fortunate to own one of the largest collections of Robinson Crusoe in the world. Known as the Robert and Miriam Lovett Robinson Crusoe Collection it was given to Emory in 2008 by Bob Lovett, a retired English professor at Wake Forest University and author of Robinson Crusoe : A Bibliographical Checklist of English Language Editions (1719-1979), the standard bibliography of the work. The cataloging of the over 800 titles that comprise the collection was recently completed. 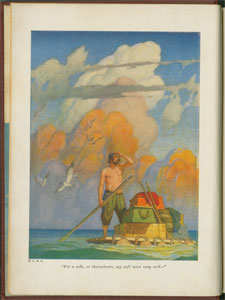 The nature of the story and its intrinsic simplicity has lent itself to adaptations and abridgement for children since shortly after it was first published. Among the many children’s editions in the Lovett collection are two unique copies from the 18th century, one from around 1780 was printed in Nottingham, England and is only 24 pages long. The other was printed in Newcastle, England around 1770 and features illustrations by acclaimed English illustrator Thomas Bewick.

Illustration has been an important feature of Robinson Crusoe editions ever since the very first. The majority of editions have had illustrations of some sort whether simplistic in style for children or more sophisticated for adults. Noted illustrators of Robinson Crusoe include the aforementioned Thomas Bewick in the 18th century, George Cruikshank and J.J. Grandville in the 19th century and N.C. Wyeth in the 20th century. The collection even includes wholly illustrated comic book editions of the story. 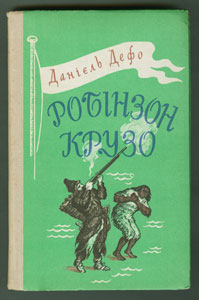 The collection spans the period from when books were handmade and bound in leather through the development of mass produced books and includes everything from mass produced paperbacks and pop-ups to fine press books and a miniature edition only 25 mm. high.

Come up to MARBL and explore the Robinson Crusoe exhibit which is on display in the reference area. You’ll be amazed at the unique ways this one story has been told over the course of its long history.