Vernon Jordan took control of Voter Education Project while it was finding its place in a changing society. Though the project was still under the Southern Regional Council, VEP became responsible for educating citizens and leaders after Congress passed the Civil Rights Act of 1964 and the Voting Rights Act of 1965. VEP also began expanding the scope of VEP activities. 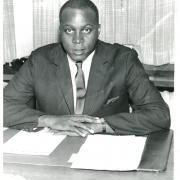 Vernon Jordan sitting at his desk in the VEP office.  Click image to enlarge.

At this point in VEP’s history, they began offering funding for local projects and sponsoring their own projects including registration campaigns, citizenship education classes, training opportunities for leaders and publishing. Between 1966 and 1970 over 600 local projects were funded throughout 11 southern states. VEP’s registration drives came in the form of the “Get-Out-the-Vote” campaigns. Their publications included research reports, newsletters and pamphlets like “Know Your Government” which focused on state and local governments. One “Know Your Government” pamphlet was published for each of the 11 southern states.

The project worked to vary their activities during the years between 1966 and 1970. This took many forms beginning in 1966 with an internship program. The first politician to accept an intern was Mayor Ivan Allen of Atlanta. Two years later the program sponsored 25 interns in three different southern states. In addition to the internship program, VEP considered state branches to recruit and train local leaders. Prior to Jordan accepting the position of director, a successful branch had been established in South Carolina. With this branch as a model, the organization began launching state VEPs in Arkansas, North Carolina, and Louisiana.

The expansion of VEP during Jordan’s five years as director saw an increase of Black elected officials. With the increase in numbers of Black elected officials came an opportunity for more education and training programs. Conferences and technical assistance programs were offered for the newly elected officials. Eventually the numbers became large enough that VEP sponsored service centers for the officials in Alabama, Georgia, Louisiana, and Mississippi. The centers held forums and provided technical information that would assist the officials in carrying out their duties. 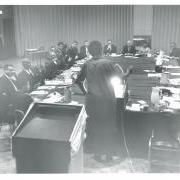 In December of 1966, a legislative seminar was held for members of state houses from the south. One of the speakers was Wiley A. Branton, a former VEP director, who was seated just to the left of the podium.  Click image to enlarge.

By the end of Jordan’s term, SRC and VEP were fighting a new bill proposed by the Nixon Administration that would take away their tax exempt status. The bill was written to curb foundations and agencies political activities. When the bill went to the House of Representatives it was broadened to prevent foundations from supporting activities which influenced elections or governing bodies as well as events that influenced any section of the general public. This bill also included a provision that stated that no agency could accept more than 25% of its total support from one foundation. VEP fought against the bill with SRC understanding the threat it posed. The 1969 Tax Reform Act was passed to eliminate the worst restrictions and gave a continued tax-exempt status to organizations conducting voter registration campaigns.