The newest exhibit at the Rose Library highlights the often-overlooked diplomatic career of James Weldon Johnson and how his international experiences intersected with his advocacy for black freedom at home and abroad. 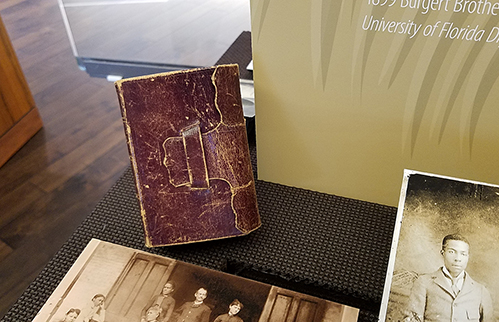 “Black Cosmopolitan: James Weldon Johnson in an Age of Empire,” examines Johnson’s early life, his political appointment in the U.S. consular service, and the effect of those years on his future. The exhibit features photos, letters, and information from collections in Yale University’s Beinecke Library, the University of Florida, and other sources as well as the Rose Library. Among the standout items are a family Bible from 1882 and Johnson’s leather satchel, both from the James Weldon Johnson collection at the Rose Library.

The exhibit was curated by Kali-Ahset Amen (14PhD), assistant research 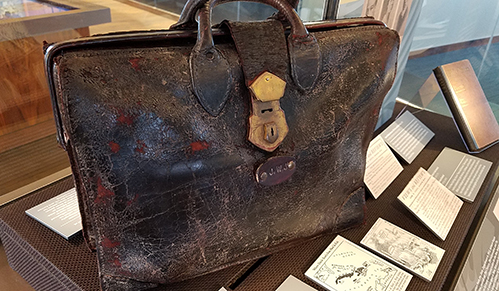 professor of sociology at the Johns Hopkins University and former associate director of the James Weldon Johnson Institute at Emory.

“I wanted to put together this exhibit because Johnson was such a significant public figure in his day. Nowadays, little is known about him except ‘Lift Every Voice and Sing,’ known to many as the Negro National Anthem, which he composed with his brother, Rosamond Johnson,” Amen says. “I hope to shine a bright light on his important work, which advanced African American high art as well as civil rights. ‘Black Cosmopolitan’ also connects the past to the present, encouraging reflection on Johnson’s legacy in a time of new struggles for racial equity and justice.”

As an early 20th-century American public intellectual, Johnson (1871-1938) influenced the worlds of literature, music, diplomacy, and civil rights advocacy. Often remembered as a literary pioneer of the New Negro era, a period during the Harlem Renaissance around the turn of the last century marked by outspoken advocacy for dignity and resistance to Jim Crow laws, Johnson’s roles as U.S. consul to Venezuela (1906-1909) and Nicaragua (1909-1913) are frequently overlooked. His official diplomacy had an impact on his later achievements as a popular artist, press critic, and political agitator on behalf of the NAACP.

The Emory Center for Digital Scholarship is creating digital components for the exhibit related to Johnson’s travels and black internationalist activity, including a forthcoming touchscreen map and an interactive collage of magazine covers.

The exhibit, which will run until Dec. 13, is in the Rose Library on Level 10 of the Woodruff Library. Parking is available in the Fishburne deck. Check the Rose Library hours webpage to plan your visit.