It may seem like an unlikely pairing: An Emory dance class using the Rose Library archives as a source for choreography? However, it’s turned out to 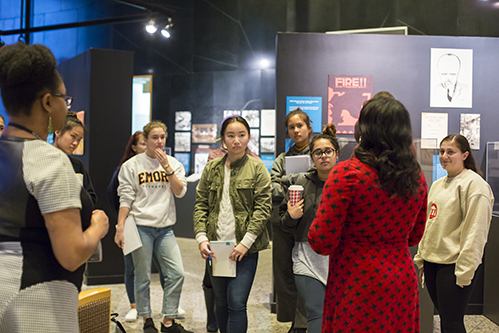 be an ideal match, and a creative way to incorporate primary resources into a liberal arts education.

Since 2014, Emory dance professor Anna Leo has made the Rose Library collections exhibited in the Woodruff Library’s Schatten Gallery the focus of the final project for her Choreography I – Solo Dance Composition class. Her students tour the exhibitions with a Rose Library archivist as a jumping-off point, seeking ideas for their final dance, then spend time in the Rose archives to conduct research in their chosen collection that will inform their choreography.

Working with archival material has been a rich source of inspiration for dance students to create storytelling through choreography for their end-of-semester solo final projects, Leo said.

“Their reaction initially is, how am I going to do this?” Leo said. “I let the students know this is part of the process. Many choreographers do extensive library and archival research depending on the nature of their work. I want the students to recognize this as a way to deepen and broaden their choreographic voices. By the end of it, the students have produced some really provocative solos.”

“It’s such a creative use of the archives,” said Gabrielle Dudley, the instruction archivist for the Rose Library who works with the students. “For me, it helps stretch my imagination about what the archives can do. We should be thinking about more uses of the archives like this, rather than just having students write a paper.”

Leo’s class last semester had four weeks to craft original choreography. The class of 10 students visited the gallery’s current exhibition, “Building African American Collections: Highlights from the Curatorial Career of Randall K. Burkett.” (The exhibition closes Feb. 19 temporarily but  reopens March 1 for an extended run.) Then they spent time up in the Rose Library, learning how to request a collection and conduct research in it. 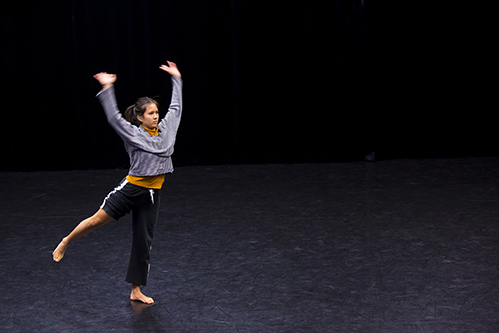 Elise Stumpf summoned the spirit of Savannah fortune teller Mamie Wade Avant after spending time with her collection in the Rose Library.

Senior Elise Stumpf found her project idea in the archives of Savannah fortune teller Mamie Wade Avant. Her interest was piqued when she saw a crystal ball on display in the exhibit, and she decided to look at Avant’s collection of personal items in the Rose Library to get a better idea of who she was.

“I immediately became interested in her relationship to [both] organized religion and unorthodox mystical practices,” Stumpf said. “I was also able to actually use her fortune-telling card decks, and I was fascinated by the use of numbers. The themes of her spirituality and numerical patterns kept coming back to me.”

For her performance final, Stumpf recorded herself saying some of Avant’s divinations, “spliced so as not to accidentally incur a spell,” she said. Her movements imitated a woman casting spells and invoking spirits. “I trusted that whatever research I did would manifest in my movement and body in whatever phrase material I created,” Stumpf added.

Senior Jacob Robbins was intrigued by the Robert Langmuir African 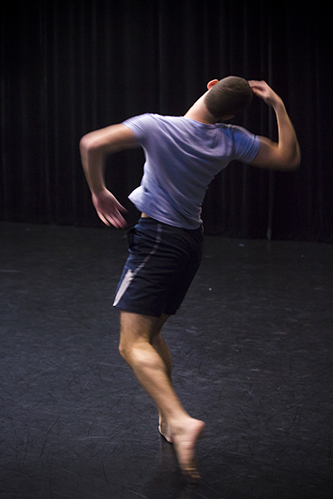 Jacob Robbins brought to life the daily routines of the people pictured in the Robert Langmuir African American Photograph Collection.

American Photograph Collection (1840-2000) after seeing some of the pictures in the exhibition, and he studied a scrapbook in the Rose Library collection. Fascinated by the daily life captured in the old photos, his goal was to bring some of those photos alive in his final dance: a boy licking an ice cream cone; kids waving and standing on the streets, leaning on fire hydrants; men working in a store, and other aspects of life.

“I created gestures and postures to mimic their everyday life,” Robbins said. “I hoped to get across the nature of how they lived their lives, as well as re-create what it was like to flip through a large, delicate scrapbook.”

Sophomore Kaleo Laymon created her dance using archived audio clips about women’s and civil rights and violence from interviews with late poet Lucille Clifton and other poets. She interpreted the stories of more than 10 speakers, and her repeated slaps of one hand against the other near the end of her performance were stunning, as were the moments when she sat completely still except for the slight shaking of her head as a woman spoke about violence on the recording. 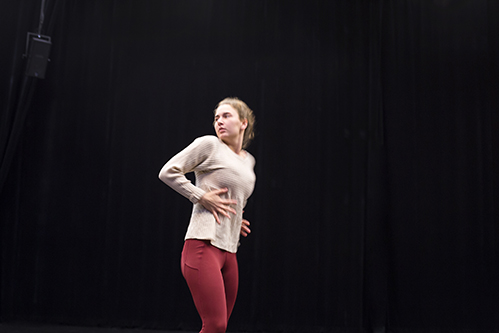 Kaleo Laymon used audio interviews of poets, including the late Lucille Clifton, to convey their feelings on violence, civil rights, and other issues in her original dance.

“I was inspired by the distinct differences in each speaker’s voice, story, and personality,” Laymon said. “I wanted to capture the emotions they really felt, be it sadness, desperation, frustration, terror, joy, or introspection.”

Leo’s students said they enjoyed the experience of finding inspiration in the archives. “This was by far my favorite study we did in this class,” Laymon said. “I really loved working with the archives. Not only were the Rose Library staff incredible and so helpful, but I loved listening to the way history has shaped the art of poetry.”

“I thoroughly enjoyed using the archives,” said Stumpf. “I found it extremely helpful to hold the physical possessions of the person I was researching. It allowed me to feel her energy in a way that I wouldn’t have been able to otherwise. All dance making is research of some kind and the archives provided an amazing jumping off point for that research.”