A new exhibition of historical photographs at Emory University encourages 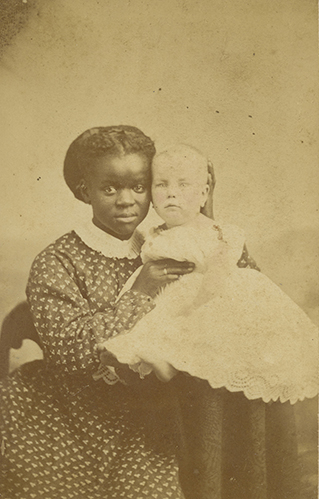 visitors to consider the lives of African American women who spent years raising the children of white families. “Framing Shadows: Portraits of Nannies from the Robert Langmuir African American Photograph Collection” now open on Level 3 in Emory’s Woodruff Library. The exhibition is free and open to the public.

The images were drawn from the Robert Langmuir African American Photograph Collection in the Stuart A. Rose Manuscript, Archives and Rare Book Library. This extensive collection contains more than 12,000 photographs depicting African American life from 1840–1970. Wallace-Sanders discusses the collection, the images and her research in a series of short videos featured in the exhibition. Also included are rare books from the Rose Library that provide context for the photographs from a variety of perspectives. 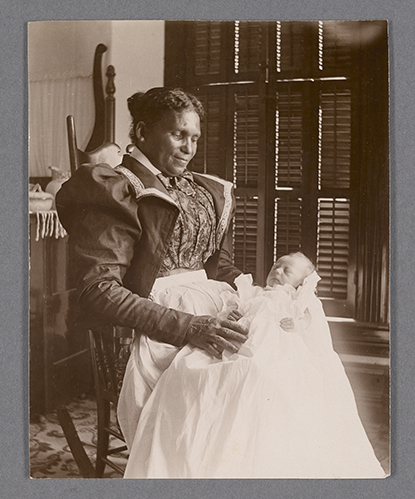 An African American woman sits on a chair, holding a baby on her lap, in front of a window. Based on the leg-of-mutton sleeve on the dress she is wearing, this photo is estimated to have been taken around the 1890s. Robert Langmuir Photograph Collection, Rose Library at Emory University.

The Rose Library’s extensive African American history collections were built for precisely this kind of exploration and analysis,” says Rose Library director Jennifer Gunter King. “We are so grateful to Kimberly Wallace-Sanders for developing the Framing Shadows exhibition from the Langmuir collection, and for helping to recover a fuller understanding of the experience of African American women who were pressed into service as nannies. We hope this exhibition will encourage more projects and collaborations with the Rose Library.”

Wallace-Sanders, who is working on her second book about African American nannies, has researched this topic since her doctoral studies at Boston University. Through this exhibition, she invites visitors to look beyond stereotypes replicated in books and movies such as “Gone with the Wind” and “The Help” and question common assumptions about the images and the relationships they depict.

The curator encourages visitors to move beyond their initial reactions or discomfort and think about the nannies’ humanity as they examine the images – taking cues from body language, facial expressions and clothes.

“Some viewers project a level of warmth and affection that isn’t actually evident in the photograph. Other viewers see pain or humiliation,” Wallace-Sanders says. “I encourage them to look closer. I tell them, ‘The more you look, the more you will see.’

“This is the most complex interracial relationship there is,” she adds. “The stereotypical narrative emphasizes devotion and loyalty. But I want people to look a little deeper and ask some additional questions. Does this woman have children of her own? Who’s taking care of her children? Will she even get to see the portrait that was made for her employer’s family?”

Many of the nannies depicted in these images are anonymous; the backs of 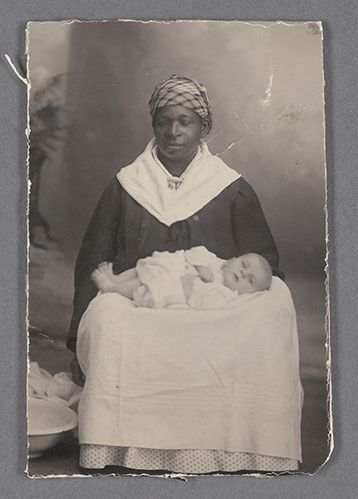 In this undated photo, an African American woman is shown with a baby laying on her lap. The woman appears to have fallen asleep while posing for the photo, perhaps exhausted from the demands of her work. Langmuir Photograph Collection, Rose Library at Emory University.

the photos often bear the child’s name, but not the caregiver’s. Most of the information about the relationship between these nannies and their charges comes from the white family’s perspective, not the African American nanny, Wallace-Sanders says.

“Biographical information about the women is hard to come by, because this person was focused on her relationship to them, which is not unusual. The narrative that we have heard is, ‘she was like a mother,’ or ‘she was like family,’” she says. “But they don’t know her first or last name, whether she was married or had children, or where she lived.

Ideally, Wallace-Sanders would love for the “Framing Shadows” exhibition to inspire visitors with relatives who served as nannies to come forward with their stories. “For African Americans whose mothers or grandmothers or aunts were in domestic service, what do you remember them saying about it?” she says.

“We know so little about these women, aside from what the white children as adults remember about them,” she adds. “I hope by making these images public, more information will come up.”

The exhibition, on Level 3 of the Woodruff Library, will remain on view through Jan. 5, 2020. The Woodruff Library is located on the Emory University campus at 540 Asbury Circle in Atlanta, 30322. Parking is available in the Fishburne deck.
Related Links:
For media inquiries, contact: