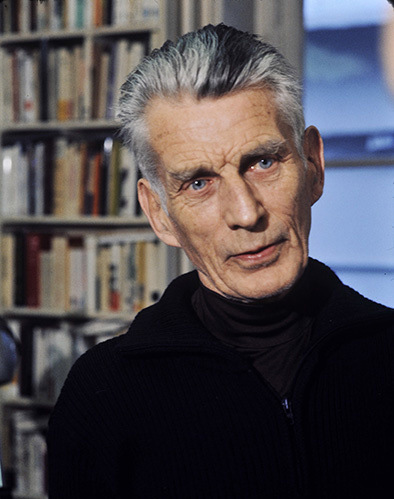 (beckett.library.emory.edu), an open-access website listing the archival descriptions and locations of the letters of the Irish Nobel laureate Samuel Beckett. Users can browse the Location Register by recipient, physical description, sender and recipient addresses, language, repository, collection, and previous publication.

The Location Register has been developed in collaboration with over 25 American literary archives, among them Emory, Boston, Chicago, Columbia, Harvard, Northwestern, Stanford, and Yale universities, as well as the Ransom Research Center of the University of Texas at Austin, the University of California at San Diego, Boston College, Dartmouth College, and others. Plans are moving forward to include international collections in public archives in the Location Register.

The website has been made possible through a grant by The Gladys Krieble Delmas Foundation and gifts from Christopher Herbert and Nancy Welch, as well as from the College of Arts and Sciences of Emory University, Emory Libraries and Information Technology Services (LITS), and the Emory Center for Digital Scholarship (ECDS).

The Location Register is a result of The Letters of Samuel Beckett at Emory University, (english.emory.edu/beckettletters), a project established to collect, consult, and transcribe all extant letters by Beckett, and to publish the selected edition of “The Letters of Samuel Beckett” in four volumes (Cambridge University Press, 2009-2016). The edition has been published in French, German and Italian, a reflection of worldwide interest in Beckett’s writing.

Over 16,000 letters were consulted and transcribed in the editing process, but the selected edition could include only about 20 percent of them.

“Shortly after the publication of the final volume, the question arose of how to make the research of more than 30 years available to future scholarship,” says general editor Lois More Overbeck. “It was not feasible to publish all of the letters for many reasons, not least because letters have two owners, the writer and the holder of the physical property. Metadata provided a methodology to make it possible to respect these rights, as well as to make the archival location and descriptions of the letters accessible.”

The Location Register of the Letters of Samuel Beckett is the first step to preserve the cumulative knowledge of this unique archive. Also in development is a Linked Data Project of the Letters of Samuel Beckett in Public Archives. In addition to the data in the Location Register, this open-access website will index the content in each letter: persons, places, organizations, productions, and publications mentioned, as well as Beckett’s writing, translating, directing, reading, and attendance at events.

“We are honored to be a part of this special project to enhance widespread access and strengthen new forms of scholarship and research in significant ways,” says University Librarian Yolanda Cooper. “We have no doubt that this work will ensure the introduction of Beckett’s work to future generations of readers and scholars.”

Repository of Samuel Beckett materials in the Stuart A. Rose Manuscript, Archives, and Rare Book Library

Charles Monteith collection, 1948-1994. Collection of materials relating to Faber and Faber editor Charles Monteith including letters written between 1948 and 1994 from many of his literary associates.

Peter Fallon – Gallery Press collection, circa 1967-1998. Personal and literary papers of Irish poet and publisher Peter Fallon, as well as the archives of the Gallery Press.