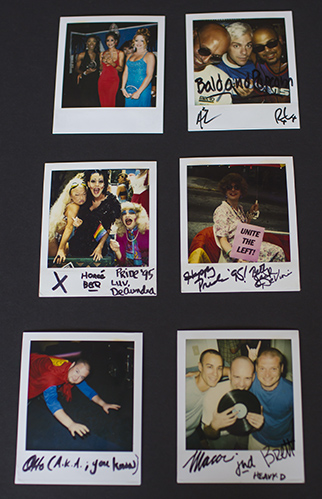 One of the most remarkable aspects of the collection are the more than 5,000 Polaroid photographs that document Atlanta’s LGBT communities.

“Arge was Atlanta’s Andy Warhol. He always carried his camera with him and he was always taking pictures,” says Randy Gue, Rose Library’s curator of modern political and historical collections. “These one-of-a-kind instant photos capture the inside story of a community and an era that isn’t well documented.”

The photos chronicle life at the Metro and other clubs, Atlanta’s celebrated female impersonator scene at benefits like Wigwood and WigOut, house parties, the “American Music Show,” an Atlanta-based public access cable TV show, and the city’s contemporary art scene.

“I never knew what I was doing, I just knew that I had to do it,” Arge says. “At the end I was shocked by how much work there was.”

The Polaroid collection began because he had a hard time remembering names, he says, so he started taking photos of people he met in the club and writing their names on the pictures. Soon he discovered that standing behind the camera helped to dissolve his social anxieties. At no time did he feel that he was documenting anything. “People knew I had no agenda,” he says. “It was the closest I ever came to being a mirror.”

In an era before smartphone cameras, Polaroids came with their own 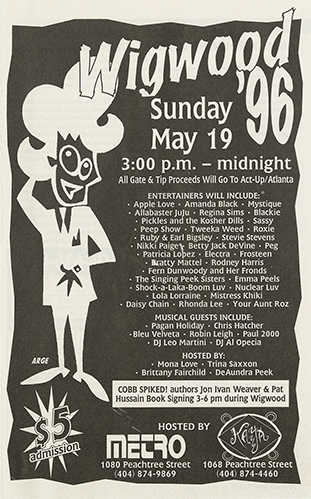 Arge is also an artist who designed this 1996 flyer for the annual Wigwood fundraiser.

limitations and sense of excitement.

“With Polaroid, you were limited to packs of 10. So I tried to be thoughtful and careful,” Arge says. “I wanted people to look their best and relay what was going on in the room. After you got the image, you were holding the object that the moment created. All the energy of that moment transfers into this object and it recharges the moment.”

People in the community also poured their creativity into making flyers and invitations to events. “People would handcraft 30 invitations,” he says. He saved everything that came his way, including his own artwork from childhood.

Arge’s artwork has appeared in many Atlanta magazines and has been exhibited at numerous Atlanta galleries and institutions, including Kai Lin Art, 800 East, and the Atlanta Contemporary Art Center. He was one of eleven artists chosen for the 2001 Atlanta Biennial, and in 2010, the readers of the LGBT media outlet Georgia Voice voted him Best Local Artist. His corporate commissions have included the Coca-Cola Company, IBM, and Turner Broadcasting.

“Everything I make is my child,” he says. “It’s wonderful that Emory has it now and can protect it and let the work wander off and have conversations that I’m not a part of. People will be able to find what they want in it.”