Part of an occasional series of profiles on Woodruff Library librarians, a valuable resource at Emory University.

Students and faculty working in women’s studies, psychology and journalism have an ally in subject librarian Jennifer Elder, who connects 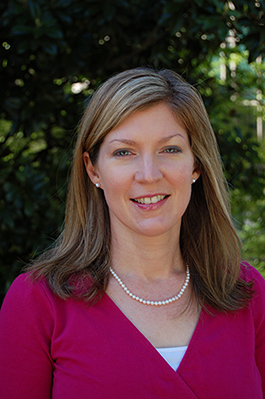 them with the resources and information that will make their research efforts a success.

An Atlanta native, Elder has traveled up and down the East Coast for school. She earned her BA in psychology from Boston University, her MA in English and American Literature from New York University and her MSLIS (Master of Science in library and information science) from Florida State University.

As a subject librarian at Emory Libraries, Elder juggles a variety of responsibilities, such as collaborating with faculty to provide research instruction for their classes and designing research guides for class assignments. She also works one-on-one with faculty, students and departments by holding research and citation analysis consultations. In addition, she acquires materials such as journals, databases, books and DVDs to support the research needs of the Emory population.

Elder is involved on campus, especially throughout Women’s History Month. As co-chair (with English and literature subject librarian Katie Rawson) of the 2017 Art+Feminism Wikipedia Edit-a-thon committee, she helped plan the March 21 event, which drew 14 editors who made 18 edits on six articles.

One of her most satisfying moments as a librarian was helping a professor locate an elusive psychology test. Elder recalls receiving a thank-you email from that professor that read, “Jennifer, thank you so much for your help. I really didn’t mean to make you do all this work . . . . But you most certainly solved the problem for us, and we are very appreciative!”

She enjoys the challenges of the research projects students and faculty bring to her, such as those of an undergraduate student interested in the history of the women’s anti-suffrage movement and a graduate student who wanted to use historical women’s magazines to trace the change in terminology used to describe autism. She also helped a psychology lab map every possible way their research topic could be searched in three different databases.

“Jennifer Elder is an invaluable member of the library staff,” says Lynne Huffer, the Samuel Candler Dobbs Professor of Women’s, Gender, and Sexuality Studies (WGSS) at Emory. “Her expertise in women’s, gender, and sexuality studies allows me to rely on her not only to help with acquiring materials but also with pedagogical tasks. I have been especially impressed with Jennifer’s work with students in my classes. She has been a crucial part of my writing intensive introductory course, WGS100W, in which she has provided valuable service to my students in working on their research papers. She is a true gem.”

Elder often recommends women and gender studies-related databases and resources such as the Gerritsen Collection and Rose Library’s Modern Politics collection to students and faculty. The more recent Women’s Studies International and GenderWatch databases both provide historical information on women from the 1970s to the present. In addition to its burgeoning LGBT collections, Rose Library has the papers of several women activists in its modern politics collection, including human rights activists Frances Freeborn Pauley and Eliza K. Paschall, the Georgia Women’s Christian Temperance Association; suffragist Eleonore Raoul, the first female graduate of Emory’s law school, and the League of Women Voters of DeKalb County.Library access and scholarly communications are of great value to Elder. “I believe in libraries, and that libraries and the services they provide of preserving and providing access to information play an integral role in our democracy,” Elder says.

1. In her free time, Elder volunteers at Furkids, a local no-kill animal shelter.2. She plays acoustic guitar, and can play a respectable version of “Blackbird” by the Beatles.3. She can speak Spanish and read French.