In the time leading up to the Civil War, the southern states were tasked with deciding how they were going to move forward after it was determined that Lincoln was to be the next President. South Carolina made the first move towards secession at the end of 1860. Mississippi, Florida and Alabama soon followed. It was time for Georgia to make a decision, not only about whether or not they wanted to still be joined with the North, but if their secession would lead to a united front in the south. 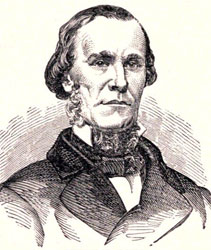 Joseph E. Brown, from Pictorial History of the Civil War in the United States of America,by Benson J. Lossing, 1866

While South Carolina was looking for that unity between the southern states, Governor Joseph E. Brown of Georgia let it be known that he felt each state should be making decisions for herself. It was hoped that perhaps the threat of secession and war would lead the North to work harder to keep the Union together. On January 2, 1861, Governor Brown called for a designation of delegates from each county who would, two weeks later, vote on the issue of secession. (Bryan, p.1-3)

In Fulton, the county of Atlanta, the vote was overwhelmingly for secession. In Dekalb County, which is directly adjacent and is the county of Emory, there is a more interesting story to tell. Able to offer two delegates at the convention, both chosen were strongly in favor of staying with the Union. One of the delegates, Charles Murphy, actually stated that he “would never live to see Georgia out of the Union.” (Garrett, p.494) Unfortunately, his statement rang true and he came down with pneumonia which took his life on January 16, the opening day of the convention.

After it was put to vote, it was decided that Georgia should secede from the Union, and on January 19, 1861, an Ordinance of Secession was drawn up and signed by the convention delegates. MARBL has one of the few copies remaining of this ordinance. 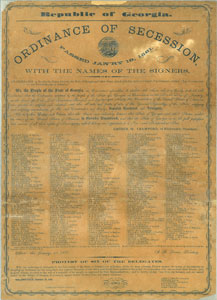 Ordinance of secession passed Jan'ry 19, 1861, with the names of the signers<Click to Enlarge>

The meat of the Ordinance states:

We do further Declare and Ordain, that the Union now subsisting between the State of Georgia and other States, under the name of the United States of America, Is Hereby Dissolved, and that the State of Georgia is in the full possession and exercise of all those rights of Sovereignty which belong and appertain to a Free and Independent State. 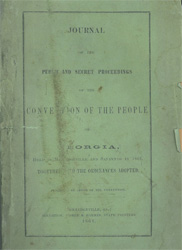 Journal of the Public and SecretProceedings of the Conventionof the People of Georgia, held inMilledgeville and Savannahin 1861, together with the Ordinances Adopted.

MARBL also has a copy of the Journal of the Public and Secret Proceedings of the Convention of the People of Georgia, held in Milledgeville and Savannah in 1861, Together With the Ordinances Adopted. This will give you the details of the convention as well as how the votes were cast that fateful day in January, 1861. If you'd like more general details on the state of Atlanta at this time, check out what is becoming a dear friend to this blog, Garrett's Atlanta and Environs, as well as Confederate Georgia by T. Conn Bryan. Both are available to view in MARBL's reading room.

So we've begun the war here, and while I know much is available on the Atlanta Campaign of 1864, I'm excited about the treasures I'm bound to find in the stacks of MARBL that will give us insight into the city right up to Sherman's march. Stay tuned!