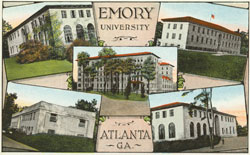 The late 1960s and early 1970s were times of uncertainty and unrest for students at Emory University.  Social, political, and racial strife were ever-present and Emory students found themselves confronted with racial and gender inequities, the Vietnam War, the draft, a presidential impeachment, and the assassinations of prominent national leaders. Perhaps to counterbalance these weighty concerns, Emory students of the time crafted raucous and risqué traditions. Publications from the 1960s and 1970s, housed in the Emory University Archives, show students had a particular fondness for panty raids and streaking. 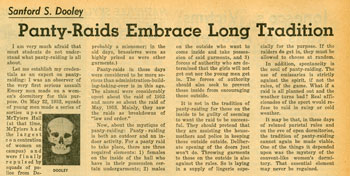 Panty raiding, the older of the two traditions, existed even before the University became officially coeducational in 1953. In a 1969 article in The Emory Wheel, Dooley details the necessary elements of a proper panty raid.  He explains, “For a panty raid to take place, there are three required elements: 1) females on the inside of a hall who have in their possession certain undergarments; 2) males on the outside who want to come inside and take possession of said garments, and 3) forces of authority who are determined that the girls will not get out nor the young men get in.” In the same article, Dooley reflects on raids past and wonders whether the tradition will survive Emory’s transition from “convent-like” to open women’s dormitories. History has shown that it did not. Dooley’s description of the 1952 raid may leave some glad of that fact. According to Dooley, the 1952 raid summoned police officers from at least six different jurisdictions as distraught housemothers fretted over whether the desired panties would be obtained “by bureau-pilfering or by divestment.” 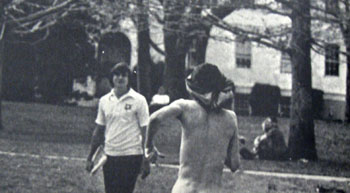 In contrast to panty raid victims, streakers at Emory willingly surrendered their undergarments (and all other garments) before taking a spirited jaunt through campus. The Campus provides a helpful definition of streaking: “the act of running nude where one ought not run nude.” Streaking seems to have reached the peak of its popularity at Emory in 1974. That year’s edition of The Campus called streaking “the thing to do” and mentioned that streakers were spotted on the quadrangle at noon, on Fraternity Row, at half-time during a sorority basketball game, and en masse near the Woodruff Library before spring finals. Following this last event, The Emory Wheel published a pictorial spread of female and male students streaking through campus, which featured uncensored frontal nudity.  The publication sparked controversy and The Wheel’s editor-in-chief was asked by University administration to resign his post. Streaking coverage largely ceased thereafter so it is unclear if, or for how long, the tradition persisted.

To view the above mentioned articles and other archival copies of student publications, please visit the Emory University Archives in the Manuscript, Archives, and Rare Books Library.