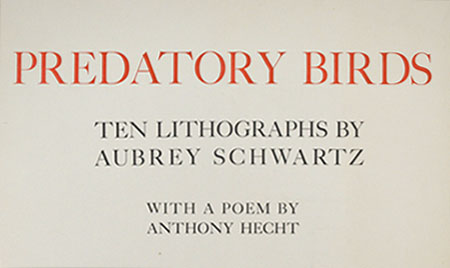 In honor of National Poetry Month, we are proud to highlight recent acquisitions of personal papers, books, and artwork given to MARBL by Helen Hecht, wife of the late Poet Laureate of the United States, Anthony Hecht.

Art is not created in a vacuum.  This is especially true for poetry, which, I would argue, more than any other literary genre depends upon a lively conversation with and about itself. Romantic notions of the brooding poet-genius working in isolation are largely just that—romantic notions. And while initial drafts of poems may come into the world from moments of singular inspiration, Great Works of Art become what they are through tireless editing, correspondence, and a good deal of humor. As a writer and librarian with the privilege of working in an archive with strong literary collections, I’ve learned that the best poems are a kind of conversation with and about other poets; they are a contemplation of the past and present artistic and historical landscape. 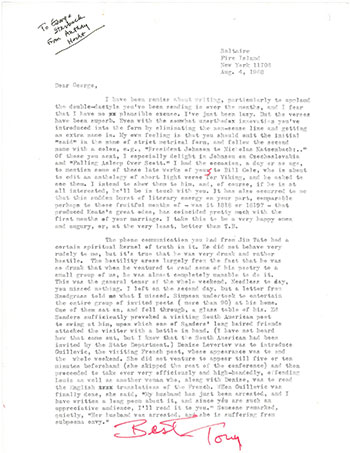 Correspondence between AnthonyHecht and George Starbuck

Among the many joys of perusing the Hecht collection is the treasure trove of letters. Hecht was a prolific letter writer, and the correspondence list of the Hecht finding aid reads like a who’s who of American letters: John Ashbery, Anne Sexton, Saul Bellow, John Berryman, Robert Bly, Harold Bloom. The most recent acquisition of letters to the Hecht collection continues the momentum with the addition of letters to or from Henri Cole, Mary Jo Salter, and W.S. Merwin among others. Among my favorite letters from the recent additions—from Hecht to George Starbuck—paints a witty and comical portrait of a reading at a writer’s conference in the summer of 1968:

“When Guillevic was finally done, she [Denise Levertov] said, ‘My husband has just been arrested, and I have written a long poem about it, and since you are such an appreciative audience, I’ll read it to you.’ Someone remarked, quietly, ‘Her husband was arrested, and she is suffering from subpoena envy.'”

But the Hecht letters represent more than a delicious compilation of tidbits about the social scene of the poetry world in the late 60’s and early 70’s. They also represent Hecht’s dedication to thinking about poetry critically. Poetic analysis exchanged between Hecht and literary critics (most notably William Pritchard), or Hecht and novice poets are given the same elegant, scrupulous dedication. This same attention is also mirrored in the marginalia of Hecht’s draft copies of “Auguries of Innocence” or “Birdwatchers of America”—also recently donated to the collection. In his correspondence, as with his poems, Hecht was a gracious and ruminative figure, an artist concerned with engaging in the root-essence of things—whether poetic form, American history, or a juicy anecdote from a writer’s conference. 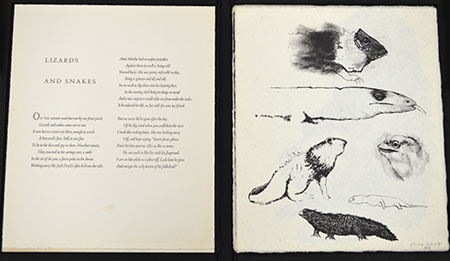 A Bestiary by Aubrey Schwartz and Anthony Hecht

Among other joys of the Hecht additions include several pieces of artwork—including 13 signed woodcuts by Michael Spafford, 10 signed and hand-colored woodcuts by Leonard Baskin and Harry Ford, and two signed artist portfolios of lithographs created by Aubrey Schwartz for the Gehenna Press. These portfolios include A Bestiary by Aubrey Schwartz (a poem by Hecht, “The Flea,” is here shown with accompanying art) and Predatory Birds—which represent one in five, and one in two copies in the world, respectively.