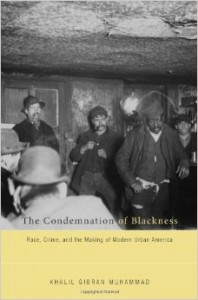 The Condemnation of Blackness seeks to link the idea of black criminality and the making of apartheid America to a tangible origin: statistics becoming science and misinterpretation. Why does a dark complexion equal criminality, inferiority, and the inability to abide by law? Khalil Muhammad delves into the various factors contributing to this societal phenomenon, and exposes the unreliability of racial crime statistics.

To begin, Muhammad supplies the idea that scholars during the Progressive era in the late 1800’s misinterpreted U.S. census data that showed blacks committed more crimes than whites and even immigrants. The census revealed that while the black people made up only 12% of America’s population, they constituted 30% of the criminal population. The census did not inform its audience of the discriminatory punishments and race-conscious laws that African-Americans faced, implying that blacks were biologically more inclined to commit crimes than their caucasian counterparts. This census fueled debates about differences between blacks and white Europeans, and was used as justification for racist ideology.

During the Reconstruction era, Muhammad surmises blacks were placed against insurmountable odds post-slavery. Blacks suffered during Reconstruction due to lack of accumulated wealth and inability to find work compared to whites. This inherent poverty placed blacks into a realm apart from the rest of the United States and immigrants at similar odds, physically and metaphorically. African-American families typically could not afford to live in affluent white neighborhoods, and realtors tended to avoid showing houses in white neighborhoods to black individuals. This poverty further divided blacks from normal society and perpetuated the “separate” mantra held by many Americans.  Blacks were never truly assimilated like white immigrants were. Muhammad states there was apathy towards blacks and thus, blacks were not aided during Reconstruction. This lack of aid further placed blacks at odds and attributed to the supposed crimes. There is a moment in which Muhammad states blacks were more likely to be arrested for crimes committed than whites, thus skewing the objective data analysis of crime among racial group due to policing in black areas.

Contemporary scholars of the time viewed the data and concluded blacks were more likely to commit crime due to their moral inferiority. And thus, “the ideological currency of black criminality” was legitimized (Muhammad 3). From the 1890’s until the 1940’s, black criminality would become one of the most commonly cited and longest-lasting justifications for black inequality and mortality in this modern urban world. This ideology has perpetuated until today, as evidenced by the daily acts of police brutality towards innocent black citizens.

With this increased crime rate and poverty among blacks, residential segregation was perpetuated due to economic inabilities to move elsewhere. The ‘ghetto’ became the product of this poverty and segregation. The increased crime rates in the ‘ghetto’ did not help the plight. The poor living conditions blacks suffered became associated with being black itself and perpetuated black inferiority to many Americans whom believed in meritocracy. Being black meant being inferior. And thus, white superiority was somehow justified in the minds of many. This supposed proven inferiority justified the exploitation of blacks. And the vicious, covert cycle of controlling blacks continued.

Interestingly enough, blacks being criminals meant mass incarceration of the group. And so it was that blacks became controlled by the white population through prison, rather than slavery. Perhaps it is just slavery by another name.