Slavery by Another Name: The Re-Enslavement of Black Americans from Civil War to World War II 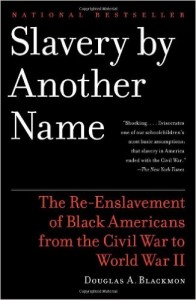 Slavery By Another Name part 1: The Slow Poison:
The first chapter is where we first start to see the plight of the Cottenham family. The Cottenhams (a variation of Cottingham) are a slave family owned by Elisha Cottingham, a prominent white man with an estate along the Cahaba River in Bibb County, Alabama. The beginning shows promise for the family, as the Civil War has just ended, freedom rings, and Henry Cottenham can finally marry Mary Bishop, a former chattel slave like himself. It should be noted that the Cottenham slaves had a rather different experience than that of most slaves in the Deep South. Because of the Cottinghams’ belief that cruelty was sinful, the slaves were rarely beaten, and they were buried only a few feet from their master Elisha in a crude graves, something thought unthinkable by other southerners. The Cottinghams believed in a greater sense of family surrounding both them and their slaves, that may be why following the Emancipation Proclamation, the majority of the Cottenham slaves stayed in Cahaba River Valley, where they continued to sharecrop and work the land. Following the end of the War, things for the Cottenhams and many other southern former slaves took a turn for the worse. In the years before and during the Civil War, slave labor proved to be increasingly useful for coal mining and and the production of iron, as skilled slaves made large profits for their masters by being rented out to work in these mines and iron furnaces. Industrialization reared its head, and southerners saw the potential money to be made in the steel, iron & coal industries after production increased greatly for battleships, submarines and weapons used for the war effort. Railroads also called for increased production in these fields.  Looking to replace the profitability of slave labor in the cotton fields, it seemed these metals would be the way to do so. This is where the need for cheap labor came in, and thus, the exploitation of the rights and lack of educational and economic resources of the black people as a whole. White southerners found an ostensible solution: returning blacks to their position in society and getting free labor out of them. How? “…every southern state enacted an array of interlocking laws to criminalize black life.” Current prisoners were leased to Railroad Companies and other industries to provide the labor they needed for free. Soon began a new process of involuntary servitude. Blacks were arrested for false crimes such as “vagrancy” or accused of owing some false debt to some white man. They were brought up on charges, and in illegitimate trials they were charged with the court fees of arrest, trial, etc. Prominent white figures then offered to pay for these fees in exchange for some labor. So, these blacks signed contracts to work for the white men who were “helping them out” by alleviating their debt by allowing them to work for them. These sentences of work lasted for months, and after being fed poorly, clothed poorly and barely sleeping, they were brought up for being provided with food, clothes and shelter, and then sentenced to work more time to pay off the increased debt.

Mass incarceration, putting absurd amount of blacks into prisons for “crimes” that are not treated the same way for whites, is just another form of slavery. Before it was a way to get free labor, now it is how the black man is kept “in his place” in society.

After the Civil War, the demand for labor was high due to the lack of an institutional slavery system. The productivity of plantations were depleting due to the lack of slaves. Once the Emancipation Proclamation was established, the plantation owners that freed their slaves had to pay blacks to work for them. This was an odd concept for Whites to commit to. In result, Black people in economic destitute were routinely captured and tried on petty or non existent charges, only to be ordered to pay an unaffordable crime. They were often falsely accused and tried in front of a white jury, thus diminishing their chances to be freed. Farming and mining businesses saw this as an opportunity to acquire the labor they lacked under the contract-leasing method. They admired the work effort of the Black population.

Part 2 of Slavery by Another Name references John Davis, the son of former slaves, and John Pace, the son of slave owners. In the beginning of the 1900’s, Davis was arrested and fined. Simultaneously, Pace bought land and was in the process of acquiring slaves through the contract method. He formulated contracts that stated he would pay their fine monthly in return for labor. Also included in these contracts, he stated that the people incarcerated were to be treated as slaves. He did this with John Davis and worked with law enforcement to arrest a certain other individuals. Whenever their contract expired, he would formulate another charge against them or simply force them to stay enslaved. Through this, his productivity drastically increased until he was investigated by the federal government and arrested.

Southern states completed these task so effortlessly through the Black codes. The Black Codes were laws passed to restrict African-Americans freedom.The incarceration and re-enslavement of Blacks was used to intimidate them out of the political elections and economic success. This manner of blackmailing blacks into slavery continued until the end of WWII

How does this translate into today’s society? Slavery is legal in prison and verified through the 13th amendment. Inmates are required to work unless cleared by a medical professional. Common labor includes mining, steel manufacturing, agriculture, and sewing. The penal system in the United states is to contribute to the mass incarceration of Blacks. The U.S only makes up 5% of the world’s population, but 25% of the world’s prison population. In prison, approximately 40% of inmates are Black. It is all a system of control.

Blackmon tells his story through examples, and let’s the records speak for themselves in part three of Slavery By Another Name. He continues with the story of Green Cottenham, a black man from Columbiana, Alabama. On March 31, 1908, he was arrested and jailed for riding a freight train without a ticket. Even though the sheriff that arrested him could not provide any evidence to the reason behind his arrest, the judge charged him with “vagrancy.” Cottenham and his friend “Mun” Monroe Dolphus were shackled and brought to the Pratt Mines in Pratt City where they were expected to pay off their $30+ fines. It would take them about six months each of hard labor. Cottenham and Dolphus were just two of thousands of prisoners sent to work in coalmines where they would face disease, death, and extreme violence. Often women would come to beg for their men by performing sexual favors for the guards. Sometimes they were arrested and the guards used them for sexual entertainment.

Slope No. 12 was a prison built where a Methodist school building used to be in Alabama in 1907. Here, just as in Flat Top and Coalbury prisons, prisoners were forced to go underground at gunpoint. Prisoners faced black lung disease, intestinal disorders, and seeping waste from the walls.  Young black boys were known as “gal-boys” and were raped and forced to perform sexual favors often. Physical punishment and torture was a common punishment prisoners faced. Outside of the mines, deputy sheriffs took “justice” into their own hands by lynching mining protestors.

Deaths occurred not from just disease, but electrocution from exposed wires, collapsing rocks, and other things that were the result of extremely dangerous working conditions. Owners of the company were trying to keep up with the work of modern technology through manual labor, and pushed the men to their limits, and sometimes that was death. By 1910, coal companies were making 15 million tons of coal per year. Using prisoners to mine the coal was cheap labor, which benefited the company owners, and sheriffs often profited from bringing men in even for ludicrous crimes such as train “jumping” and “vagrancy” a “catch-all crime.”

Blackmon concludes with that through all this, white men were benefitting from forced slave labor. For owners, it was a cheap method of production, for sheriffs, they also made a profit for rounding up black men on the street and selling them as laborers to local planters. This process did not start diminishing until five days after the attack on pearl harbor because America was afraid that it was a basis for enemy propaganda.