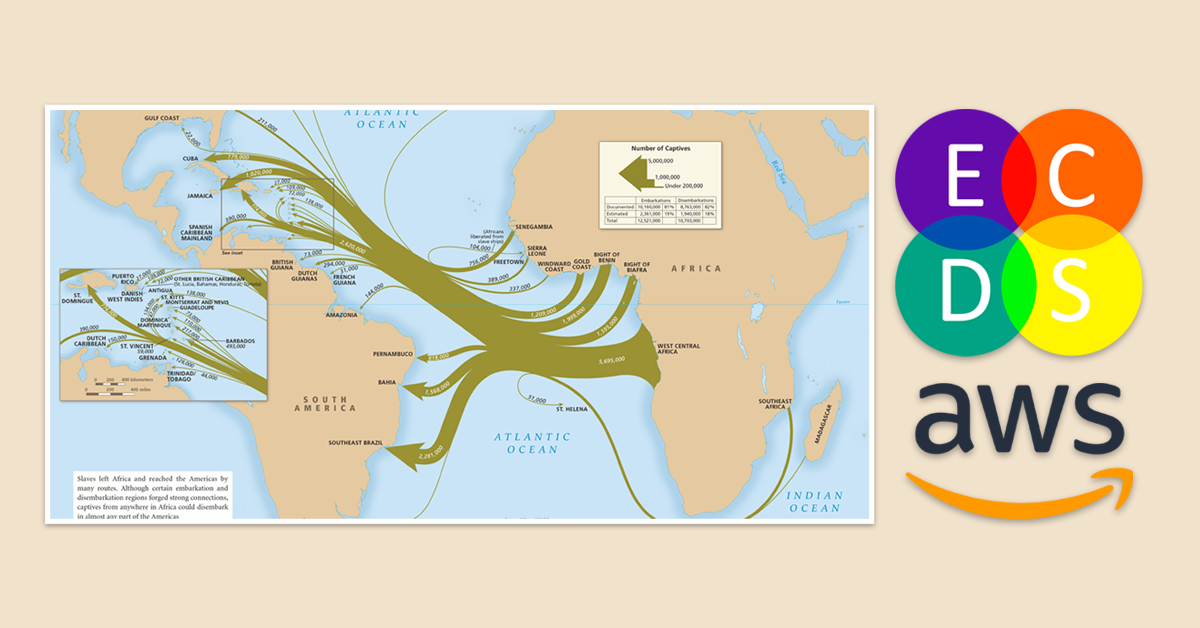 The Emory Center for Digital Scholarship (ECDS) helped Slave Voyages migrate to cloud services last week, preparing the project for a new consortium model. Slave Voyages currently houses three open-access online databases: the Trans-Atlantic Slave Trade Database, the Intra-American Slave Trade Database, and the African Names Database. Previously hosted by a single institution, Emory University, Slave Voyages announced its consortium proposal in February 2020. The project’s multiple databases, now hosted on the Amazon Web Services (AWS) Cloud platform, can easily be moved from one consortium “caretaker host” to another. The AWS migration also includes other enhancements, including improved responsiveness to traffic increases and a more robust connection between database and web server. This update is noteworthy, as Slave Voyages is now a major production system in the cloud, and supports the ECDS mission of fostering unique and open-access forms of digital publishing.

Prior to the project’s AWS migration, everything existed on three on-premise servers at Emory University. These were 1) the web server, which ran Django and Python and handled web requests; 2) the database server, which held all the data; and 3) Solr, an indexing engine that allowed for robust search options within the database.

The AWS migration overcomes prior limitations in scalability, improves the site architecture, allows better responsiveness to spikes in demand, and enables even more complex manipulations of data on the website. As ECDS co-director Wayne Morse, Jr. explains, moving to AWS “is not only a more technologically sustainable model, but is also likely a more sustainable model for continuing scholarship on the site. As more digital projects are vying for a limited amount of grant funds, maintaining the site in AWS allows for funds to primarily be used for enhancing the scholarship and not changing site code to match different host institution’s systems.” While this update did not change much about the existing architecture, future iterations can draw upon an AWS menu of options to expand upon or further streamline web capabilities. The current update also ensures readily available metrics and data for Slave Voyages, allowing project team members to keep track of how the website’s databases and resources are being used.

AWS Cloud hosting will allow the project the move easily between rotating consortium member institutions/organizations on a timed basis. As proposed in February 2020, the consortium would form a steering committee comprising one member from each participating institution. Once agreeing on the next caretaker host, Slave Voyages—which is currently plugged into an Emory AWS account—can then be plugged into any other AWS account. The move to cloud services allows access to Slave Voyages without the need for additional internal infrastructure or hardware.

The Slave Voyages website was first made possible by a 2006 National Endowment for the Humanities (NEH) grant and supplementary funding from the W. E. B. Du Bois Institute for Afro-American Research at Harvard University; the first web-based version of Voyages was launched in December 2008. Chase Lovellette, ECDS Systems Lead, explains that because the on-premise installation has been running for such a long time, the migration to AWS first required that everything existing on the server be unpacked. He notes that Gerry Hall (Emory LITS) created scripts that build out the web server from scratch, installing packages and automatically grabbing code from the project’s GitHub account. The self-documenting scripts on the cloud account allows new deployments to be done efficiently with no downtime for web users.

These changes were all implemented before August 1, 2020. This allowed the team a few weeks for any additional testing before increased traffic due to classroom use (especially K-12 educational use). The migration occurred smoothly and is now ready for scholarly and public engagement. If you are an instructor and would like to use or adapt existing lesson plans from the Slave Voyages website, you can read more about the new and updated resources in our blog post from July 2020.