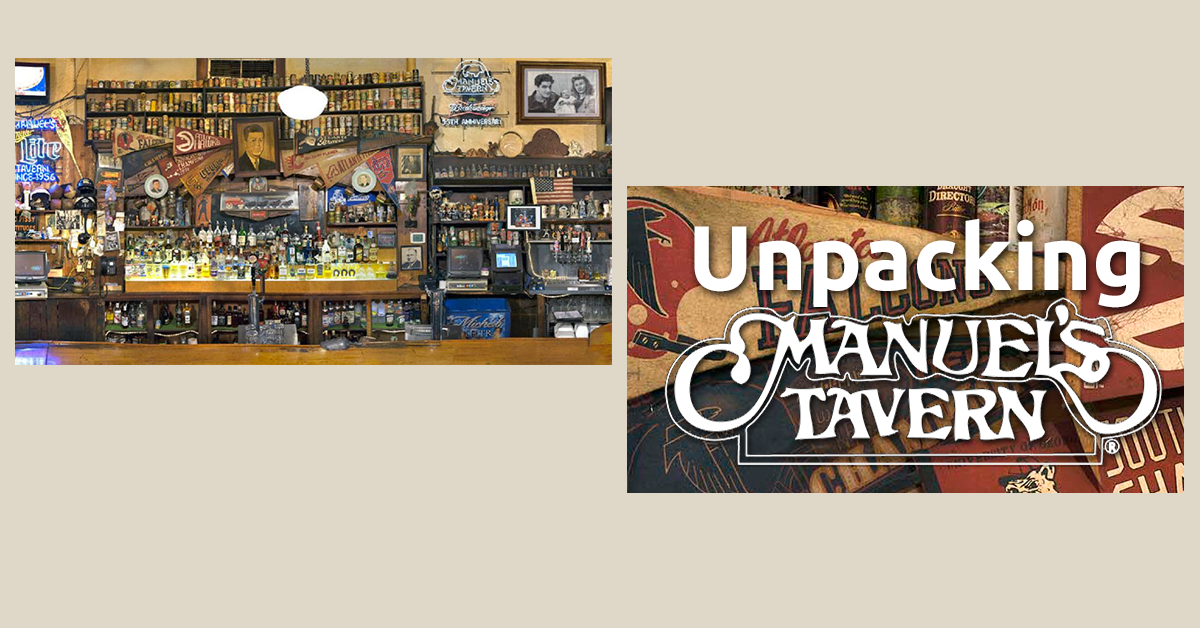 The tangible space and intangible spirit of Manuel’s Tavern can now be experienced virtually on a new website that encapsulates an expertly crafted digital archive of the Atlanta landmark bar’s iconic decor.

The website, Unpacking Manuel’s Tavern, presents a searchable database of pictures and newspapers hung on the walls in an accumulative array over time, along with immersive virtual environment with 360-degree videos and images.

An interdisciplinary team of researchers undertook the project to record decades of history before the bar’s recent renovation and to “unpack” the meaning of those items, says Jesse P. Karlsberg, senior digital scholarship strategist with the Emory Center for Digital Scholarship (ECDS).

“The principal aims of project were to document Manny’s and the items on the walls, and to engage faculty and students by creating a framework where people can write about the items’ history in context for assignments in classes,” Karlsberg says.

As an academic project, the site also features student essays emerging from courses at Emory and Georgia State universities that assigned research projects related to the documented items.

Emory partnered on the project with other institutions, including Georgia State University and Savannah College of Art & Design. The archiving efforts got underway in 2015 when Ruth Dusseault, a former visiting professor at Emory who’s now a lecturer at Georgia State, first approached the bar owners with the idea.

The new site, an Atlanta Studies Network venture that’s housed at Georgia State and managed jointly by Emory and Georgia State team members, draws on an array of software for its polished presentation:

In addition to serving as a teaching resource for undergraduate classes, the project has also provided hands-on experience for ECGS graduate student employees, including Alan Pike, now with McKinsey Digital Labs, and Sarah Melton, now head of digital scholarship at Boston College.

While the project’s initial phase is complete with the launch of the new website, the team hopes the site will continue to be used as an interactive pedagogical platform where students, as well as members of the public, can contribute research.

“The site is a model of preserving a space digitally, not just individual objects,” Newman says. “And hopefully, we can use this template for other projects to preserve spaces for the future, which is especially relevant in a city like Atlanta that is always on the move.”