Emory Herbarium (GEO) now comprises nearly about 24000 specimens including vascular plants, bryophytes, lichens, and fungi collection from the state of Georgia and around the world.

The Emory Herbarium has about 21000 specimens of vascular plants. The collection is particularly rich in specimens from Southeastern United States including Georgia, Florida, Alabama and South Carolina, but houses specimens from around the country and the world.

Query our vascular plant collection through the: SouthEast Regional Network of Expertise and Collections (SERNEC) 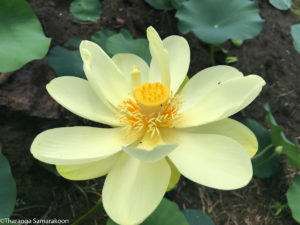 The first land plants were bryophytes. They are a group of nonvascular plants that include mosses, hornworts and liverworts. These primitive plants lack specialized tissues that allow them to transport water therefore, they tend to grow very close to the ground and live in moist environments. Despite their small size, they have leaflike, stem like and root like parts.

Emory Herbarium currently has about 200 bryophytes. We are continuing adding unique collection of mosses from the ongoing floristic study of Lichens and mosses of Arabia mountain.

Query our Bryophyte collection through the:  The Consortium of North American Bryophyte Herbaria (CNABH) 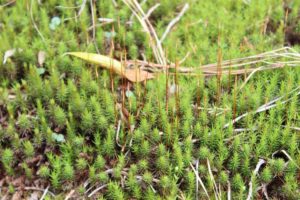 Haircap moss (Polytrichum commune Hedw.) with spore cases. This is one of the showiest mosses distributed almost all over the world. It is easy to distinguish from similar species by its 4-angled and short-rectangular shape spore-capsules, rather than cylindrical or long-rectangular. Also, the lids of its spore capsules have flat round bases with short narrow beaks, rather than a conical shape or a flat rounded base with a long beak.

Fungi are their own kingdom separate from plants and animals. Characteristically at first, they may appear to look like plants, but Molecular studies suggest the fungi share a common ancestor with the amoebozoan and the animals.

The living part of a fungus is the mycelium, which are string-like projections that weave through soil or other “hosts.” A filament in a mycelium is called hypha (plural, hyphae).

All fungi are heterotrophs with chitin-reinforced cell walls. Most fungi grow in or on organic matter and digest their food outside their bodies because they don’t have digestive organs inside of them. Many fungi live off eating dead organisms as they are the largest portion of decomposers in the environment, but other types can be parasitic causing disease in humans and plants and some others are mutualistic with other living organisms like green algae or cyanobacteria which we called as lichens.

While fungi can be seen as parasitic causing diseases for plants and animals, they also are very beneficial to our day to day lives. We use yeast to make different foods like bread, beer, and wine. We also eat mushrooms in a variety of different meals ranging from portobello mushroom to most expensive white truffles.

We normally identify fungi by their reproductive parts, or fruiting bodies which are sometimes called mushrooms! They reproduce both sexually and asexually. Both ways they release resting spores which consists of a cell or cell surrounded by a wall. These spores spread the organism to new niches by means of air or water. So far, we have identified roughly 120,000 different types of fungi, yet scientists still disagree over what the real estimated amount total is.

Emory has about 500 of fungi specimens most are belong to Dr. L Hesler’s boletes collection collected during 1947.

Query our Fungi collection through the: The Mycology Collections data Portal (MyCoPortal) 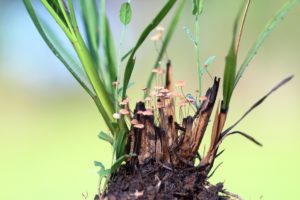 They may look like pieces of carpets on a forest floor, but they are not as simple as they seem. Lichens are complexes (mutualistic symbiosis) formed by fungi with a photosynthetic organism such as algae or cyanobacteria. Fungi in this symbiotic complex provide physical protection as well as water and inorganic salts to their algae partners, whereas the algae conduct photosynthesis and provide nutrients to the fungi. The fungi that make the lichen largely belong to ascomycetes, the “cup fungi” or basidiomycetes, the “mushrooms”. Generally, this symbiosis benefits the fungi more than the algae and the fungi determine the organism’s shape and texture. About 20,000 species of lichens are known worldwide and fungi naming based on the fungi partner.

Lichens are very resistant to cold and drought, which accommodate them for hostile habitats such as alpine, tundra and polar areas. However, most lichens are hi-light plants and are sensitive to air pollution, so few lichens grow in large cities and industrial parks. They can live for many years and survive aridity by becoming dormant and reabsorbing water quickly. They reproduce by breaking themselves into small pieces, called fragmentation or the disperse of special structures known as soredia (powdery propagules) and isidia (branched outgrowths).

Lichens are important to the ecosystem. They help form new soil layer through erosion of a rocky surface, which enables other plants to grow, and are therefore known as the pioneer plants. Their sensitivity to air pollution made them a good indicator of different levels of pollution based on the type of lichens present.

In terms of ethnobotanical uses, many lichens secrete anti-viral or anti-bacterial substance which can be developed into medications. They are also used as industrial raw materials. For example, the dye chrysalis lichen can be used to extract dyes, and the litmus paper manufactured from dye coats and litmus can be used to test the acidity of liquids based on the color change. Lichens can also be eaten by humans and animals, such as the reindeer moss mentioned above. Another example is the stone fungus: a specialty in China and Japan.

Emory Herbarium began establishing the lichen collection quite recently after it acquired a collection of about 300 specimens from local lichen specialists Sean Beeching and Malcom Hodges. Our current collection consists of about 1000 of specimens.

Query our lichen collection through the:  The Consortium of North American Lichen Herbaria (CNALH) 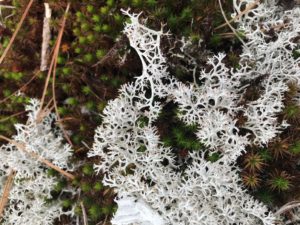 Reindeer lichen, Caribou Moss: Cladonia rangiferina (L.) F. H. Wigg. (Cladoniaceae). A lichen growing fully sun-exposed dry surfaces. Very hardy species found both I hot and cold climates. It is a  lightly colored plant that has a 3 dimensional branching with a  bushy appearance. This species is a vital source of food eaten by reindeer.