I was sixteen. It was my first class presentation for German and I had memorized half the words, with no note cards to help me with the other half of the words. My slides on my presentation were set to switch after 30 seconds, as imposed by my teacher Mr. Eickhoff, and as soon as the presentation began, it quickly went downhill. As I struggled to remember the words I had not committed to memory, the slides continued to change, and soon I just stopped talking, standing in front of my class silent as the presentation cycled on. I imagine it was very painful to watch. Mr. Eickhoff allowed me to try again a week later, and I, desperately trying to avoid the same mortifying experience, practiced my presentation dozens of times. I ended up getting an A.

Two years later I was in Berlin, Germany on a summer abroad program, standing in front of another class. This time, I was ready. My words weren’t memorized, instead, I had a general idea of what I wanted to say and a larger working vocabulary to pull from. And so I stood in front of the class and I did exactly what I couldn’t do two years before; I came up with half of my words on the spot. Not because I hadn’t prepared (though I definitely had been more interested 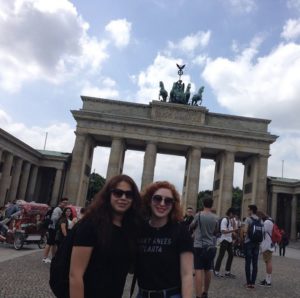 in visiting the Brandenburg Tor then doing my homework the day before), but because I knew enough of the language to phrase my sentences based on the moment. And it went wonderfully. After I thanked my class for their Aufmerksamkeit (attention), I returned to my seat and all I could think was: I just presented in German. No sweat. And if I could present in a foreign language, a language that I wasn’t even fluent in, then I could accomplish anything in my native language.

Or at least, I have a newfound confidence in my communication skills. I’ve been in front of a room full of people, overwhelmed and stressed out, and I’ve choked before. And from that experience, I’ve learned how to recognize my weaknesses and improve myself. I’ve gained the confidence I need to command a room and the humility to recognize where I need improvements, which in the workplace can make me a vital team player and introspective worker.

Class presentations are just one of the many character-building experiences language learning provides. Immersive language settings, such as living with a host family in a small Bavarian town when I was 15, have pushed me to be more flexible and adaptable to unknown experiences. In Straubing, Germany, I stayed with a girl my age, Angie, and her family. At the time, I spoke not a word of German, though Angie’s family spoke in such a thick Bavarian dialect I may not have been able to understand them anyway. Angie spoke English well, but she often didn’t tell me what plans we had for the day. Thus, I was constantly being thrust into new situations without preparation. One day we woke up and she announced we were going 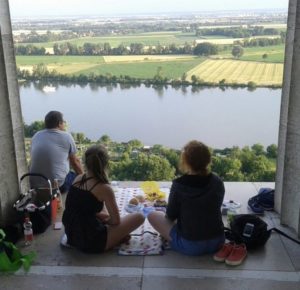 With Angie’s family on a random adventure

to a music festival in Munich. We got on the train and I realized it was a two hour train ride.

Staying with Angie taught me how to roll with the punches, but also, it emphasized to me the importance of communication. It wouldn’t have been difficult for Angie to tell me our plans; she

did speak English after all. She would tell her friends, who were with us, in Bavarian dialect, but neglect to tell me and by effect, I felt very excluded and isolated. By keeping others in the loop on details and plans, it fosters a sense of community and acceptance; something which is very important in a formal workplace.

Dedicating my time to learning German, Spanish, or even that one class I took in Latin, has improved my human relations skill set exponentially. Each experience builds on the last, whether it be choking on a presentation, taking random two-hour train rides to Munich, feeling isolated by others’ lack of communication, or one of the numerous other experiences that have equipped me to thrive in a formal work setting.