When someone learns a language, their success is usually measured by whether or not they can have a fluent conversation with another speaker of that language. In order to get to this point, you have to spend a lot of time interacting with people, and many times those people come from different backgrounds. Studying Spanish has given me the opportunity to form meaningful connections with others, by practicing with native speakers as well as other Spanish students. As a result, I have gained valuable human relations skills, which will give me an advantage throughout my career. 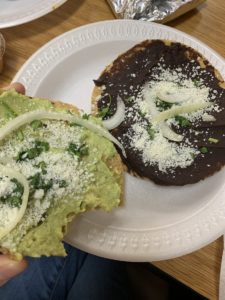 When I went out of my comfort zone to order these tostadas in Spanish, I realized what it feels like for immigrants speaking English and being judged for not speaking like a native speaker

Majoring in Spanish has led to me getting hired as a Spanish teaching assistant in a private high school. Since this high school uses individualized lessons, it attracts students with learning disabilities. Through working with these students, I have been able to interact with different types of people and learn how to effectively present information to them. I have also learned how to be patient when I have difficulty getting students to understand lessons. I’ve found that the most effective way for students to study on their own is when the information is organized in tables so it maintains their attention. It’s also important to use a large font for students that have dyslexia.

Moreover, I have had the chance to work alongside a Spanish teacher from Colombia and assist her in creating lessons, which has allowed me to learn more about Colombian culture and Colombian Spanish. For example, Colombians prefer to say con mucho gusto instead of the expression for ‘you’re welcome’ that most are familiar with: de nada, which sounds less friendly to them.

Additionally, I’ve visited Stewart Detention Center with other Spanish students to talk to detained immigrants from Central America that don’t speak English or have family to visit them. I’ve gotten to hear about the tragic political situation in El Salvador from the voice of someone that is being punished for trying to escape violence, which has inspired me to help be a voice for immigrants in a country where English is the only language considered valid. Though their situations are unfortunate, they are always happy to have someone to talk to. It was an amazing feeling to be able to cheer them up with some light conversation about music or sports, topics we can all relate to.

I think that the most important part of learning another language is using the cultural competency and the human relations skills you gain to positively represent your country. I have been able to do this in both of these situations, while simultaneously improving my ability to speak and understand Spanish.