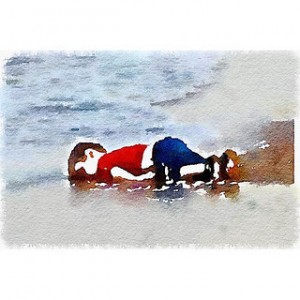 Posted on December 3, 2012 by Lindsey Beth Max | Leave a comment

Earlier this year our class read about the important role material items play in the grieving process for parents who miscarry or lose a child at birth. In these cases parents never get to spend real time with or form memories of the dead child, and the child does not live long enough to accumulate personal artifacts, so parents often rely on material objects to remind them of the child’s existence. But how does this role change when a parent loses an older child? Are the child’s possessions more important because they help fill the gap that is created from their death? Or are these possessions more painful because they are accompanied by memories of the child’s life?

In a recent Huffington Post video “Creating Space to Heal: Mother Transforms Murdered Son’s Bedroom” Beth Dargis describes her cathartic experience of transforming her deceased son’s bedroom into a hang-out space for her daughter and her friends. For some reason I had always been under the impression that parents tended to keep their deceased children’s rooms relatively untouched after their death, and in so doing created a sort of shrine to the child. This video showed, however, that cleaning out her son’s room was a beneficial component of her grieving process and provided her with a way to let life go on and create new memories. Dargis cited the fact that her son would not have wanted a shrine for himself as one of the reasons behind the rooms transformation, which is interesting considering how often times the deceased’s wishes are ignored so that their loved ones can grieve in a way that benefits themselves. While she did get rid of most items from her son’s room, Dargis still kept a few important one and created a more miniature shrine in his honor.

This video made me wonder: in getting rid of material objects related to deceased children, are parents simultaneously getting rid of their child’s memory? Or do they not need these objects because they have memories of their child, whereas parents who miscarry do not?