Melting pot. Big apple. Gateway to freedom. All of these phrases, among many others, can be used to describe the vast array of ethnicities and languages that mix and mingle in New York City. Like a vast, interconnected web, each of them plays a distinct role in the rich culture that defines the city that never sleeps. Walking through the streets, I couldn’t help but consider history’s impact on the current landscape of NYC. Uniquely forged by immigrants, the city maintains a special status as the epicenter of American diversity and a shining example of the magnificent power of the American Dream. This is exhibited in prominent landmarks, such as Ellis Island and the Statue of Liberty, but it’s also clearly visible by taking a look at the city’s demographic data. According to the NYC Department of City Planning, half of all New Yorkers speak a language other than English at home, and over 200 languages are spoken in the city. As I performed my own analysis of New York’s linguistic landscape, I concluded that, while there is an overarching theme of multilingualism throughout the city, English and Spanish tend to be used in official signage, while other languages are often used for commercial signage.

As I scanned the streets and signs of East Village, I first looked at official signage to gain a sense of how city officials were communicating their messages to non-English speakers. While I noticed that many of the signs are primarily in English, as the US is still by-and-large an English-speaking country, Spanish is the most common secondary language used when communicating critical information to a wider audience. Many of the city’s biggest ethnic enclaves are completely outside of Manhattan, much less East Village, so the fact that official signs, such as one “Hard Hat Area” sign I found near Lafayette Street, are written in both English and Spanish (Figure 1). It speaks to the status of Spanish as a quasi-official language the city government uses when they want to reach as many New Yorkers as possible to communicate, for example, that one should absolutely not enter a certain area without proper protective gear. There is another layer to this, though. Leeman and Modan, in discussing the idea of landscape as a crafted perspective, write that it is “a way of carefully selecting and representing the world so as to give it a particular meaning” (Leeman and Modan, pg. 337). New York City officials, in including Spanish in official signage, are sending the message to Spanish-speaking communities that they are welcomed, that they are included, and that they are an important part of this city. It provides a reassurance that those who speak a different language are heard and accepted by government higher-ups, in addition to common citizens. It sends the message that diversity is not simply tolerated; it’s embraced.

Next, I took a look at commercial signage to truly gain a sense of the city’s linguistic landscape. My approach involved observing what languages I saw while walking through the streets of the East Village, and, unbeknownst to me, I ended up stumbling upon Little Tokyo. It struck my attention that I’d often see signs in which English and Japanese were both displayed very prominently. One sign I found, which was for a Japanese restaurant called Village Yokocho, placed the Japanese text above the English text and in a larger font. Additionally, the Japanese characters were lit up in a bright, neon color, which made them much easier to spot from afar as compared to the plain, unexciting English letters (Figure 2). Not far from that street, I found a sign for a Japanese specialty market that placed Japanese characters in jagged, green font to grab peoples’ attention (Figure 3). The use of Japanese in this way for commercial purposes contrasts with that observed by Leeman and Modan in DC’s Chinatown, as, in this case, the businesses seemed very connected to the Japanese identity. The workers were Japanese, the products were authentically Japanese, and the people visiting the establishment were Japanese.

In my analysis of New York’s linguistic landscape, I found a city that embraces its diversity in both public and private signage, going beyond meaningless translations and instead providing space for every cultural identity to thrive and prosper. 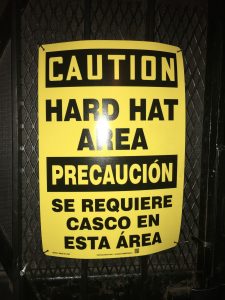 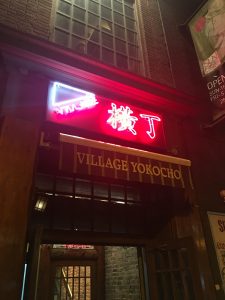 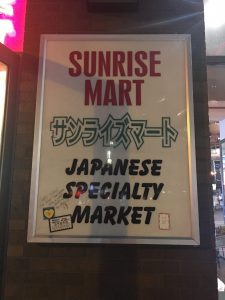