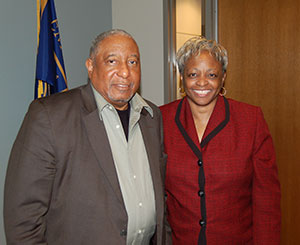 Civil rights leader Rev. Bernard LaFayette Jr. stopped by Emory University’s Robert W. Woodruff Library on Dec. 3 to discuss his experiences and new memoir in a conversation led by Carol Anderson, associate professor of African American Studies at Emory. Lafayette, who worked alongside Martin Luther King Jr. as the national program director for the Southern Christian Leadership Conference (SCLC), led the voter registration drive in Selma, Alabama, a job he said no one else wanted (and the basis for his memoir, In Peace and Freedom: My Journey in Selma).

The audience of about 50 people listened in rapt attention as LaFayette spoke; his stories were fascinating, and he was simultaneously thoughtful and lighthearted. He even made Anderson laugh so much that at one point she teasingly told him to stop.

In the years since the height of the civil rights movement – when he took part in the Freedom Rides (and was jailed along with the other riders) and survived a murder plot on the night Medgar Evers was killed – LaFayette has become a sought-after expert in nonviolent direct action, instrumental to the strides in the movement.

LaFayette described his experiences of being jailed with the other Freedom Riders, saying: “You can only fully experience the meaning of life when you’ve made the decision to give it up.” Despite being in jail, they still felt free, because they still owned themselves, he said. The Freedom Riders transformed their cells into a school, teaching lectures and singing songs. He said that a place is labeled and defined by the activity inside. At this point, many people in the audience were humming with agreement and interest.

When asked why he agreed to lead the voter registration campaign in Selma, which had a reputation for extreme racism, LaFayette said simply that the rumors struck his curiosity. Even before he arrived in 1962, LaFayette began studying, trying to find out why people in Selma were “so mean.” He hunted down the monthly publication for the White Citizens Council and analyzed his findings to discover how racists think. LaFayette described it as being like an academic assignment, and Selma was his test. How do people act and how should he respond? What would happen if someone went up to Jim Clark, the white, intimidating sheriff of Selma and was not afraid?

Most of the work he did in Selma, he said, was asking questions, studying people and learning how to respond to them.

“That’s what I do—I ask questions,” LaFayette said toward the end of the event. And when asked by an audience member about the recent voter suppression bills in several states, he returned some questions of his own: “Why did they gut the voter registration act? Why was it necessary to have an act in the first place? Has there ever been a vote in history that has been this impactful? How do you get people to participate in the government?” These are questions that persist since the U.S. Supreme Court earlier this year struck down portions of the 1965 Voting Rights Act that LaFayette and others in the civil rights movement fought so hard to see realized.