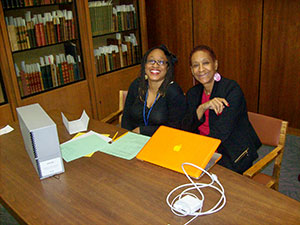 My mother, Dr. Paula Whatley Matabane, an Atlanta native, has been on a life-long, genealogical mission to dig up the roots of her family. Archives are her trenches. Despite the fact that I’ve been working in MARBL for awhile now as a graduate assistant and have used various African American collections in my scholarly research I had never suggested to mom that we use African American collections for family research. That changed a few weeks ago in late November when my mother and I made an appointment to look at the William Levi Dawson papers, 1903-1990. Dawson was director of the Tuskegee Institute choir when my mother’s mother, Frances Ione Davis Whatley, was a student there, and a first soprano soloist. My mom hoped and trusted that there would be some solid documentation of the years 1935-1939 among his papers. We were rewarded! In box 60 we found two photographs of the Tuskegee Institute choir from the late 1930s. I’ll let my mother take it from here:

“To my joy and exhilaration, I saw my 18-year old mother standing fourth from the end of the third row of choristers in the chancel of the historic Tuskegee Institute Chapel. My heart leapt with joy to see my beautiful young mother dressed in a lovely white dress (that I’m sure her mother or sister Garland made for her) with a corsage pinned on her left side, holding her songbook to “Hiawatha’s Wedding-Feast” by Samuel Coleridge-Taylor. I could feel the heavy pride, burden and weight that those teenagers and young adults must have felt in representing the race, to “prove” their worthiness and right to the tree of life. 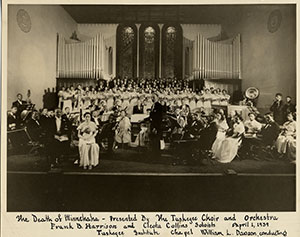 “The Death of Minnehaha” presented by The Tuskagee Choir and Orchestra, April 1, 1939.

That was 1936. Mashadi put that photo and its folder back into box 60 and pulled out another folder. In the chapel with the orchestra, I saw Mama dressed in white with a corsage on the left, but this time she was on the front row at the very end holding a songbook. The date was April 1, 1939. The concert was ”The Death of Minnehaha,’ a concert name I was quite familiar with because Mama had saved the program, and after 76 years I still have it. Now I have a photograph that connects me more deeply and intimately to my mother’s memories. Staring at the photo, I wanted to ask Dawson for his assessment of Mama as a singer. Did her re-positioning onto the front row mean she was now a lead singer? Even more so, I wanted to hear the songs, hear her voice.

The Dawson collection held out more hope since there is an audio collection and, indeed, I found an October 10, 1937 radio broadcast by NBC! Mama had told me about the choir’s radio broadcasts but I assumed it was local radio, not the NBC Radio Red Network being heard all over the nation. In this opening broadcast of a series of weekly concerts by NBC, Tuskegee President Frederick Douglass Patterson introduced Alabama Governor David Bibb Graves who, in a classic voice-of-God emulation, extolled the virtues of the Institute by noting, of all things, that ‘no graduate of Tuskegee Institute was ever in a courthouse, was ever in a penitentiary or was ever upon relief row.’ In their usual perfected disciplined artistry the choir sang a capella five African American spirituals — ‘Go Down Moses,’ ‘Hold Out Till Light,’ ‘Couldn’t Hear Nobody Pray,’ ‘Deep River,’ and ‘Swing Low, Sweet Chariot.’  Thanks to my experience at MARBL, I later found a 1938 NBC recording from that same broadcast series at the Library of Congress. Mashadi found reviews of the broadcasts in various historical newspapers. Our search continues.”