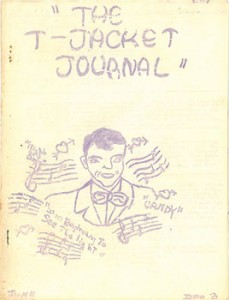 Emory’s Manuscript, Archives, and Rare Book Library (MARBL) recently acquired six issues of The T-Jacket Journal, the official newsletter of the Sing with the Sinatras Club of Atlanta. This group of “bobby soxers,” or fans of swing music, shared a love of Frank Sinatra, to whom they comically vowed their devotion: “I pledge allegiance to the Bobby Sox Brigade, And to the Singer, for which it stands…” The journal, written from 1945 to 1946, is the earliest Atlanta fanzine in MARBL’s holdings. Published every six weeks and for annual dues of seventy-five cents, the zine was edited by club president Juanita Stephens of Edgewood Avenue. The newsletter was produced using a mimeograph, and each cover (as pictured here) was hand-drawn by different readers. The journal’s star-studded honorary members included Atlanta native Harry James and former Georgia resident Evelyn Keyes. Each issue contained news of Sinatra’s music and films as well as his political appearances, such as his support of Franklin D. Roosevelt, in addition to fan profiles, Sinatra-inspired essay and poetry contests, and even a pen pal program, AAFFA (Adopt A Foreign Fan Association), designed to connect American fans with fans overseas. Here’s an excerpt from one ode to the most swell of singers:

“Can’t help swooning For the song that Frankie is crooning I don’t care what they say Frank affects me that way And I gotta keep swooning all day.”

The T-Jacket Journal’s readership impressively spanned nineteen states and is proof of the South’s participation not only in “Sinatra-mania” but in other pop cultural trends, which spread through national radio programming. Fanzines like The T-Jacket Journal are ephemeral publications written by and for a common fan base that shares an interest in a particular person or genre of literature, film, or music. Some of the most widely read fanzines were those produced in the United States and England during the punk era of the 1980s. MARBL houses an array of Atlanta-based punk zines, such as Ratlanta, Restless and Bored, Suicide Attempt, and P.M.A. These self-produced publications were an important means of communication within punk subculture, as they espoused countercultural ideals and promoted punk music through band profiles, album reviews, and show announcements.

Come to MARBL, and check out The T-Jacket Journal and our other Atlanta fanzines.