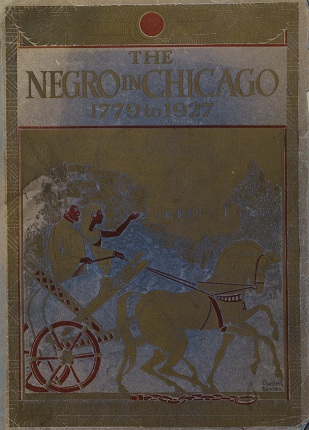 Two volumes in MARBL open a fascinating window onto the world of Black Chicago in the late 1920s and provide firm evidence of the vibrancy of what has been characterized as the “Chicago Black Renaissance.”  Published respectively in 1927 and 1929, the 1927 Intercollegian Wonder Book or 1779-The Negro in Chicago-1927 and The Book of Achievement The World Over—The Negro in Chicago 1779-1929 were the creative genius of Frederic H. Hammurabi Robb (1896-1977).  Both volumes are filled with biographies of local and national leaders, histories of fraternal organizations, churches, schools and businesses, with photographs of perhaps a thousand individuals in each.  MARBL has multiple copies of each, with varied bindings, one of which has a magnificent “soft” cover by the Chicago artist Charles C. Dawson.

The books were officially published by the Washington Intercollegiate Club of Chicago, an organization formed initially as early as 1909.  It took firm root in 1922 when college students from across the city decided to revitalize the group.  In 1926 the dynamic Frederic H. Hammurabi Robb—then a student at Northwestern Law School–was elected president.  He determined that the Intercollegians should produce what would become “the largest and most elaborate Book ever published about the people of the great city of Chicago.” 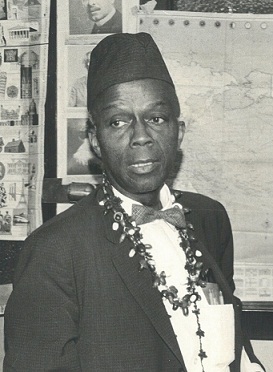 Under his inspired leadership, the 232-page first volume was produced by an army of “intercollegians” who prepared historians of local organizations as varied as the Pullman Porter Benevolent Association (with photographs and documentation of its creation) and detailed histories of prominent churches such as Pilgrim Baptist, led by the dynamic  Junius C. Austin.  The book was designed and written by the young cadre of students and recent graduates, and African American photographers, artists, illustrators, cartoonists, designers, and printers made possible the book’s completion in less than a year.

Following its publication, Robb took the first of many trips abroad, where he would develop an international network of students and leaders from Africa, Asia, South America, and Europe. 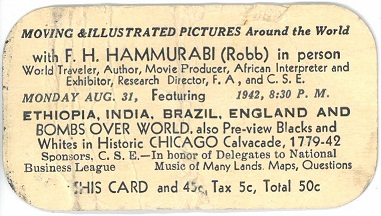 An Advertisement for one of Hammurabi Robb’s speaking engagements

In 1928 he returned to Chicago and resumed leadership of the Intercollegiate Club where he oversaw production of the second and even more substantial volume that appeared the following year.

By the 1930s he had dropped the surname “Robb” and adopted the name Hammurabi.  At the same time, he decided to devote himself to the promotion of African and African American history.  He established his “House of Knowledge” in the carriage house of a building at 3806 South Michigan Boulevard that Margaret T. Burroughs and her husband Charles would eventual turn into the first home for the Du Sable Museum for African American History.  Hammurabi wrote, a column for the Chicago Defender, lectured, and hosted speakers such as his friend and fellow historian Joel A. Rogers.  He published pamphlets, sold books, and showed films on African and African American history, some of which he produced himself. 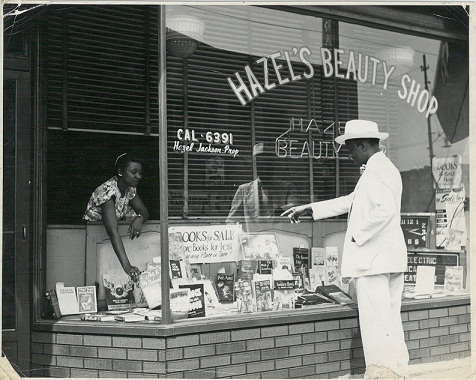 One of the locations where Hammurabi Robb sold books, pamphlets, and other materials

MARBL recently acquired a small cache of broadsides, flyers, calendars, and business cards, as well as pamphlets and photographs, including a few letters between Hammurabi and J. A. Rogers.  Because he changed his name several times, related items need to be located by searching both the online catalog and the MARBL finding aids database for “Hammurabi,” Fidepe Hammurabi, and Frederic H. Hammurabi Robb.  He also published African American history calendars and pamphlets that may be located by searching under his imprints “House of Knowledge” and “Century Service Exchange.”

These materials provide insight into the world of this fascinating advocate of African and African American history.  As historian Adam Green has noted, Hammurabi and his House of Knowledge, “proved a key inspiration to the array of Afri-center artists, activists, and educators flourishing in Chicago from the Depression to the present” (in Selling the Race:  Culture and Community and Black Chicago 1940-1955).

Green also provides a detailed account of the origins and content of the 1927 and 1929 Wonder Books in his essay, “The Rising Tide of Youth: Chicago’s Wonder Books and the “New” Black Middle Class” in The Middling Sorts: Explorations in the History of the American Middle Class, edited by Burton J. Bledstein and Robert D. Johnston.