This blog post is one of several providing additional information on the collections highlighted in the exhibition, “Changing Atlanta, 1950-1999: The Challenges of a Growing Southern Metropolis.”

The Druid Hills neighborhood on the east side of Atlanta has long occupied a precarious position between the traditional and the modern. The neighborhood, which exemplified the genteel and racially-charged New South in the 1988 film Driving Miss Daisy, is listed on the National Register of Historic Places. It was partially designed by the famed landscape architect Frederick Law Olmsted, who also used his talents to create New York City’s Central Park, and contains a linear park bearing his name. Despite its historic character, Druid Hills was often integral to plans to modernize and improve transportation in metropolitan Atlanta as the city grew. Its location between Stone Mountain and downtown Atlanta has made it a prime target for both road-building initiatives and housing and business development, often to the chagrin of the neighborhood’s residents.

In 1972, Emory University biologist Robert Platt wrote to Georgia governor Jimmy Carter in opposition to a proposed Druid Hills Tollway that would run through the community and connect the Stone Mountain Freeway to central Atlanta. The “inevitable and severe deterioration” that would be done to the neighborhood, Platt told Carter, was “too high a price” to be paid. He spoke for a number of other residents of the community, who deplored the destructive impact that the highway would have on the neighborhood’s idyllic character. Largely due to neighborhood opposition, the tollway was never built. 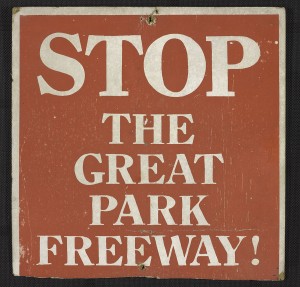 A few years later and in a much different capacity, Carter was involved in another neighborhood controversy. After leaving the US presidency, Carter decided to locate his presidential library in the Poncey-Highland neighborhood near Druid Hills and proposed a Presidential Parkway to provide access to the facility. Druid Hills residents wrote angry letters to the former president opposing his plans. They again succeeded in resisting the construction of a major thoroughfare through their neighborhood, arguing that Atlanta’s existing surface streets were adequate to serve the library. In 1990, shortly after Atlanta’s selection for the 1996 Olympic Games elevated the need to improve traffic flow within the city, the city and surrounding neighborhoods reached a compromise that extended the newly-named Freedom Parkway from downtown on the west to Moreland Avenue on the east, stopping the freeway just before it could enter Druid Hills.

Neighborhood residents, however, did not always succeed in stopping development within the area. In the 1990s, the heirs to the land known as Durand’s Farm sold the tract near the intersection of Clairmont Road and North Decatur Road – land which was rich in “marshes, streams and fields” – to a developer that intended to use the land for housing. Archaeologist Gordon Midgette claimed that the land was historically important, having been used as a temporary headquarters for the Union Army during the Civil War. Midgette also argued that there was evidence of prehistoric settlement on the site, making it further worthy of preservation. Midgette’s files on the history and archaeology of the Durand’s Farm area, which reportedly “bulge[d] out of a briefcase and a cardboard box,” provided a compelling resource for neighborhood residents who opposed developing the land. But despite neighborhood protest, a Superior Court judge ruled in favor of the developer and permitted construction to proceed. 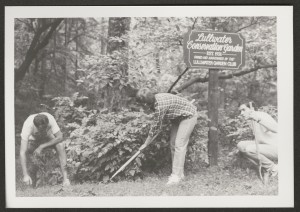 The Druid Hills Civic Association actively works to preserve the gardens and homes in the area.

The Druid Hills Civic Association (DHCA), a neighborhood group founded in 1938, was deeply involved with all of these issues. In addition to articulating positions on construction projects through and within the community, the DHCA has also sponsored the yearly Home and Garden Tour and other cultural events to promote neighborhood life. The DHCA’s records document the history and activities of the Association and its relationship to the metropolitan Atlanta area. They contain correspondence, administrative materials from the Association’s Board of Directors, project files, promotional material for neighborhood events, photographs, and other materials. They will serve as a valuable resource for scholars interested in community life, metropolitan growth, and the modern history of the Sunbelt South.

The Druid Hills Civic Association records comprise one of the four collections currently featured in the exhibit entitled Changing Atlanta, 1950-1999: The Challenges of a Growing Southern Metropolis, which is on display in the Schatten Gallery of the Robert W. Woodruff Library until June 19.