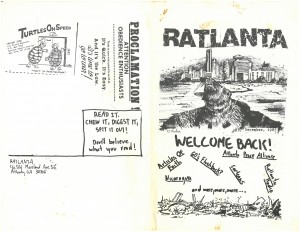 Ratlanta was one of several zines produce during the 1980s.

Forget BitTorrent, Pollstar, Myspace, Pitchfork and Facebook events. Emory University’s Stuart A. Rose Manuscripts, Archives and Rare Book Library has acquired a collection of Atlanta punk rock fanzines from the 1980s, including editions of Positive Mental Attitude (PMA), Ratlanta, Restless –N- Bored, Suicide Attempt, and Swing Mag. These ephemeral publications are printed on cheap, plain paper, often stapled or folded by hand and were typically distributed at venues, records stores and high schools. Atlanta’s punk zines are raw, frenetic publications with the cut-and-paste production aesthetics of a ransom note and feature everything from the predictable (reports on where to find the cheapest beer in town) to the surprising (reflections on the Iran-contra affair and anarchist manifestos). In his study of zines Notes from Underground, Stephen Duncombe describes them as “rantings of high weirdness and exploding with chaotic design.” In their form as well as their content they capture the vibrant Do-It-Yourself (DIY) attitude that characterized the early days of punk music in Atlanta.

The Atlanta punk scene could claim a royal genealogy, as host to the first Sex Pistols concert in the United States on January 5, 1978. Through zine “scene reports” it soon forged strong links with emerging scenes across the country from large centers like Washington, D.C. and San Francisco, to nearby ones in North Carolina and Florida. Atlanta punk also developed its own unique local character distancing itself from the college rock and new wave music coming out of nearby Athens, GA. In this collection of zines, interviews with local groups like Neon Christ stand alongside those of national bands like Bad Brains, Corrosion of Conformity and the Butthole Surfers.

One of the compelling aspects of Atlanta punk was that it forged a counter-current to the suburbanization of the region over the preceding decades. “Greetings from Duluth, a place you wouldn’t want to visit much less live in,” wrote one contributor. “White flight” was not unique to Atlanta, but it was particularly pronounced in this city. Punk pulled middle class kids whose parents had abandoned the city for the northern suburbs back into urban spaces like Little Five Points and downtown punk venues, Metroplex and 688. For some suburban school kids this simply involved hitching a ride into town for the night. “If anyone lives near Northrope, why not offer this kid a ride,” asked Suicide Attempt’s editor in response to one letter.

For other Atlanta punks the move to the city was more permanent. “I grew up in Marietta, Georgia and went to Sprayberry High which is redneck city,” writes anarchist zine publisher Lacy in an edition of Restless – N – Bored. She describes her life as a flight from middle class conformity, represented by a job in Marietta’s Lockheed Martin plant where her father and other siblings worked. She moved first to Sandy Springs, where “I could see Atlanta in the distance,” then started working in town as a go-go dancer “hoping to let go of all that Baptist sexual repression and find out what the real world was like.” After two months of dancing she fell in with a group of anarchists and became politically involved for the first time. 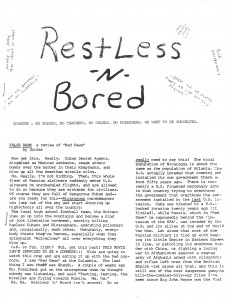 Popular culture and politics were often critiqued in zines.

For many Atlanta punks, anarchism best represented Punk’s challenge to the culture and politics of the Reagan administration. It runs throughout this collection of Atlanta-based zines and takes on a variety of forms. In a scathing review of the 1984 movie Red Dawn in Restless – N – Bored, editor Spider writes, “but, get this part…THIS MOVIE ISN’T SUPPOSED TO BE A COMEDY,” before going on to critique the ratcheting up of Cold War rhetoric and letting the President know that “Restless –n- Bored isn’t amused.” Cold war politics are also a frequent subject in Ratlanta, which in the mid-1980s was carrying field reports from “our little punk ambassador” in Central America. “You can listen to what Reagan’s saying about Nicaragua being terrorists,” writes Philip, who was volunteering on a Sandinista rural development project at the time, “[or] you can go to Georgia State and go in the library and do some research and find out how bad the US supported dictatorship was.”

In addition to pulling suburban kids into the city, zines helped spread punk culture and politics back out to the suburbs. On the inner cover of a 1984 edition of tiny Swing Mag the editors solicit students to “distribute 10-25 copies of Swing Mag at your high school.” In 1985, a group of Northside High students wrote in to Ratlanta after Ronald Reagan visited their school. They responded to coverage of the June 6 event in local media which made it appear as though students were enthusiastically supporting Reagan in the face of outside protesters. “The day before Ronnie’s visit [our principal] came over the PA and announced to the student body that any student protesting [the visit] will lose all academic credit for the final semester and will not be allowed to complete their final exams.” “Many of us could not handle this and didn’t go to school that day,” they continued but wanted to show their support for the protests and confirmed that they had organized their own “I Hate Ronald Reagan Party” at the nearby Chattahoochee River.” 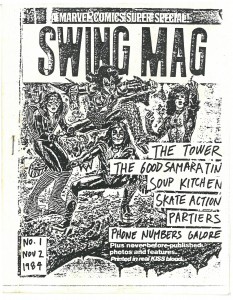 Zines provided a forum for sharing information and contacts.

It is critical to remember that in the pre-internet era, long before file-sharing programs, review sites, and online band platforms would transform independent music, zines served a critical utilitarian function as a forum for information and to bring together like-minded individuals. Nowhere is this DIY approach more apparent than in Swing Mag’s directory of “frequent partiers’ phone numbers.” “Select a few at random and call until you find out what’s up,” the editors advised of the list of names and phone numbers appearing at the back of the zine, a few of whom were profiled in each issue. “On the other hand,” they continued, “if you refuse us your number, do you think it’s fair to use this precious resource?” In a subsequent issue the editors proudly announced that “soon-to-be-legend Swing Mag partiers directory” had grown by 30%.

In an article entitled “Did Punk Matter?” Kevin Mattson locates the genre’s importance in the “robust community of producers” that it forged. In Atlanta, as in other scenes across the country, zines like Positive Mental Attitude were central to the creation of a community that extended well beyond the music. They did so in a highly participatory way in which the consumers were also the producers and often – by necessity – the distributors as well. “Our staff is you,” SWING MAG editors told their readers. “If you have an idea come to our meetings.” Embracing that tradition, Rose Library invites you to come discover this critical source for the early history of Atlanta-based punk music and youth subculture that we have added to our growing collection.