This blog post is one of several providing additional information on the collections highlighted in the exhibition, “Changing Atlanta, 1950-1999: The Challenges of a Growing Southern Metropolis.” 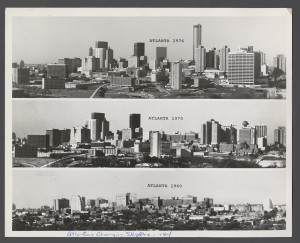 The Rose Library’s latest exhibit, “Changing Atlanta, 1950-1999: The Challenges of a Growing Southern Metropolis,” highlights the emergence of Sunbelt Atlanta and illustrates how Atlanta citizens met the challenges of their booming city in the second half of the 20th century. The exhibit features materials from four Rose Library collections: the Randolph W. Thrower papers, the John A. Sibley papers, the Community Council of the Atlanta Area records, and the Druid Hills Civic Association records.  The Community Council of the Atlanta Area (CCAA) records encompass 23 linear feet (57 boxes, 4 oversized papers [OPs], and 1 audio record) and include administrative records, committee files, printed materials, program records, reading files, subject files, and writings.  Materials relate to the Council’s work on poverty, drug and alcohol abuse, daycare, health, recreation, employment, housing, and aging, and its involvement in the establishment of various human services programs in Atlanta.

What was the CCAA?

The Community Council of the Atlanta Area (CCAA) was an agency that specialized in social planning (a process that helps communities identify strengths and weaknesses and determine ways to improve their quality of life) in the 1960s and 70s.  The CCAA acted as an intermediary between public and private human service agencies, governmental bodies, businesses, civic groups, and individuals in the Atlanta area, most notably in Midtown and the surrounding neighborhoods.  The CCAA evaluated and reported on the gaps between social services and the populations who needed those services; they created institutions of their own and advised larger service organizations and the local government to fill the gaps.  For examples, the CCAA co-founded Volunteer Atlanta to support the staffing needs of social service organizations; they established a community center in Midtown to be operated by and for the local hippie and transient communities; and they advised the City of Atlanta to promote job training and education initiatives for Atlanta’s youth.  The CCAA worked to mitigate social inequalities by promoting access to education, information, health services, transportation, and employment, especially for low-income Atlantans.

One of the best documented areas of CCAA activity was the Midtown area between 10th and 14th Streets; you might recognize it as the area between Georgia Tech and Home Park, Northside Drive and Piedmont Park.  In 1969, the hippie community in that area was butting heads with the local businesses and landlords who would not hire nor rent to “longhairs.”  This is about the same time as the emergence of heroin in the community, which was recognized as a pressing public health issue by officials and as a dangerous incursion to the local hippies.

On August 4th, 1969, Atlanta police performed a nighttime drug raid on 14th Street, which resulted in a riot.  The CCAA determined that the best way to help the hippie community and diffuse the situation was to install a community center and call a Town Hall meeting of officials, businessmen, and community residents.  The Community Center opened in December of 1969 at 1013 Juniper Street, at the intersection of Juniper and 10th, and was operated and staffed by community members.  It was something like a half-way house and information center, connecting the community to health and counseling services and assisting residents with their job searches.  You can read more about the center in The Great Speckled Bird, online at Georgia State University’s Digital Collections website or in the Rose Library reading room.  A compilation of relevant articles is also available in the exhibition. 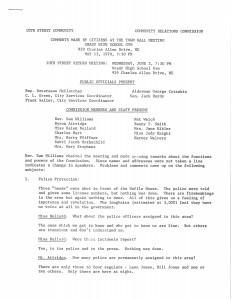 Some in the Midtown neighborhood felt the police were not doing enough to protect their community.

The Town Hall meeting was held on May 13th, 1970.  The transcript, part of which is on display, highlights the core tensions between the hippies and other members of the community, including stereotypes of drug abuse, laziness, and poor hygiene about the “longhairs” and of unfair persecution and blatant discrimination about police, landlord, and employers.  The hippies resented the association of heroin with their community, as they themselves were very against heroin usage and had been seeking the help of authorities in solving the problem.  Another large source of contention was housing: landlords complained that hippies crammed too many people into their houses and “trashed” them, so they would not rent to hippies again; hippies complained that they were evicted, sometimes without notice or cause, and that they had to share their housing because the alternative was rampant homelessness.  An unidentified resident pointed out the absurdity of the situation: “Up on 15th Street, near the Art Center, people leveled their houses rather than rent to longhairs.”

Who were the CCAA?

The CCAA had several notable members, including:

Director Beck and his staff promoted equal access to education, information, health services, transportation, and employment, often writing directly to members of Congress and collaborating with other social service organizations.  CCAA staff members were advocates, social workers, librarians, and volunteers; CCAA board members were politicians, lawyers, and businessmen who sympathized with the CCAA’s efforts.  Together, the CCAA represented and mediated two “sides” of Atlanta’s shifting social environment: policy makers and Atlantans affected by those policies.

The Community Council of the Atlanta Area records contain fascinating documents that illuminate other facets of life in 1960s-1970s Atlanta, including economic and educational disparities between and within communities in Clayton, Cobb, DeKalb, Fulton, and Gwinnett counties.  Come explore the CCAA records for yourself between March 23rd and June 19th in “Changing Atlanta, 1950-1999: The Challenges of a Growing Southern Metropolis” at the Schatten Gallery and in the Rose Library reading room in Emory University’s Robert W. Woodruff Library.

Learn more about the exhibit at the Rose Library’s Exhibitions page.